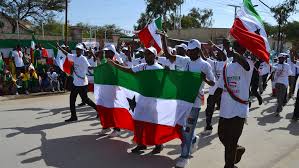 In 1991 the northern section of Somalia declared itself an independent democratic state, since then Somaliland has struggled on its path to find international recognition while the rest of Somalia has become infamous for anarchy and violence. Somaliland: An Experiment in Democracy follows the 2012 election spotlighting the difficulties of running an election in an undeveloped country with a fragile infrastructure. While threats from outside (including terrorism and piracy) and inside (such as factionalism and vote rigging) loom over the process, one man is tasked with keeping the election fair. We follow Ali – an ex-investment banker from Toronto – who gave up his old life to run the electoral commission, and it is through him that we see the scale of the challenge facing Somaliland’s nascent democracy. Somaliland: An Experiment in Democracy is a close up look at how democracy functions under difficult and unfamiliar circumstances, and gives an insight into why so many countries fail in their attempts to have a system based on popular representation. To be the first to watch more full length documentaries, subscribe here: https://www.youtube.com/channel/UCb7x… Welcome to Reel Truth History, the home of gripping and powerful documentaries. Here you can watch both full length documentaries and series that explore some of the most comprehensive pieces of world history.