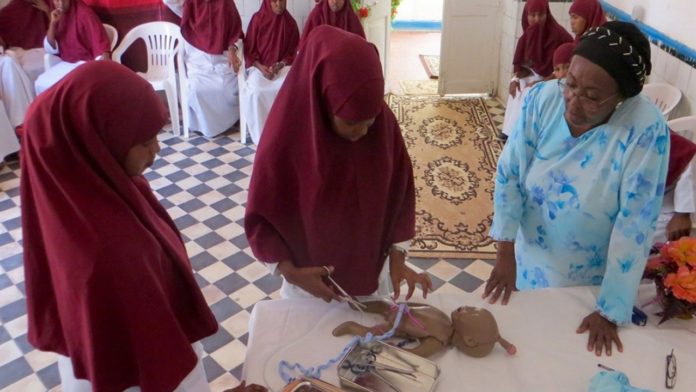 The women’s health advocate and former Somaliland foreign minister weighs in on maternal care during Covid-19, the disease’s unknowns, and humanitarian responsibility.

Edna Adan, one of the world’s most famous advocates for women’s health, a former Somaliland Foreign Minister, a former WHO officer responsible for training midwives in 22 countries, and founder of the country’s Edna Adan University Hospital, is angry.

In particular, she’s disturbed by what she sees as a worldwide neglect of beleaguered Somaliland, both before and after Covid-19 appeared. “I hope that anger comes through that message that I’m giving you,” she told Direct Relief during a recent conversation.

The organization reached out to Adan to find out how Covid-19 is affecting maternal care and midwifery in her hospital.

But for the autonomous region of Somaliland, what Adan refers to as the “cruel beast” of coronavirus is just one of many concerns, among them one of the highest maternal mortality rates in the world; widespread poverty; and the legacy of a devastating civil war that killed hundreds of thousands before the country declared independence from Somalia in 1991.

In a wide-ranging conversation, Adan spoke about improvised protective gear, a lack of coronavirus-related guidance and information, and humanitarian responsibility.

Direct Relief: What were maternal and child health like in Somaliland before Covid-19 appeared?

Adan: Maternal and child health before, during, and God knows, after corona, was never good.

Somaliland is a country that has known a long civil war with Somalia – an 11-year civil war that ended in 1991 and it had destroyed everything that Somaliland had.

We do not belong anywhere, but we still have to care for 4 million Somalilanders who have a right to decent health care.

The answer is: deplorable. Health care is deplorable in Somaliland.

Now that the cruel beast of corona has come around as well, it’s just going to make it worse. Women die of causes that pregnant women should not die of. They die of infections. They die of postpartum hemorrhage. They die of eclampsia. Eclampsia kills many of them because too few women, maybe one out of 10, will have a prenatal examination, will be seen by a health professional.

So whatever problems she gets, she just deals with it the best she can, or maybe through a traditional birth attendant.

Direct Relief: Tell me about the care you’re providing in the hospital.

If you take a pyramid as an example, the base is the broadest. We’re trying to fill the base of the pyramid, or as much of the country as possible, with people who’ve had some training either in nursing or midwifery.

There are still pockets that have no midwives at all. We continue to train midwives, but now we need to raise the bar.

We have seven training schools in Somaliland today, each one training nurses and midwives. So we’re not a lone ranger anymore. But we need to improve the standards.

Direct Relief: How is Covid-19 affecting the care that you provide?

Adan: There are 12 confirmed cases that the government has announced. But I suspect that there are many more undiagnosed, unknown cases. People are nursing their family members in their homes, not understanding the danger of cross-infection, and I am suspecting that…12 is a gross under-estimation.

We’ve seen more women delivering in the hospital, which is good. But we see a lot of complicated cases.

Last night we had somebody who was sent from Burao, which is the center of the country. That’s a six, seven-hour drive across Somaliland to come here. She was bleeding. She delivered, the baby is fine and she’s fine, but she could have died on the way.

In the middle of the night, we also had a woman who had a placenta previa. Since yesterday, in the last 24 hours, we’ve done four Caesarian sections. A clump of complicated cases are being sent here because some of the smaller clinics, the maternity centers, have shut down.

Anybody who comes across an obstetrical problem sends them to us, which – I’m glad we’re here for that, for them, but I fear it’s going to be a big load on us.

Direct Relief: What are your midwives doing differently? Is the virus making it harder for them to do their jobs effectively?

Adan: Well, we don’t have any PPE to start with, so what can be the difference? They’re wearing gloves. They always wore gloves. We made some homemade shields from lamination paper. We improvised masks out of it. We tied a band on the top so the person can tie the band around the neck and you have the plastic shield in front. I’m wearing my own cloth mask, which we make.

Today, we received 6,000 surgical masks. Thank God. That’s a blessing. We had a training from MSF two days ago to try to train some of our staff for whatever eventualities.

[But] it’s a big mess. It’s a very uncertain world everywhere. And if the big countries with all the resources and all of the knowledge and all the expertise are suffering as much as they’re suffering, it doesn’t take much imagination to understand how a poor isolated, post-conflict country in Africa can be faring.

Direct Relief: Do you think that the virus will have an effect on outcomes for mothers and children?

Adan: I’m sure. Mothers are breathing. They will breathe, they’ll get droplets. Family members will infect them. I hope not, but regardless of whether they’re pregnant or not, young or old – the virus doesn’t know the difference between a pregnant woman and not pregnant. Whatever the community gets, the pregnant women will get.

But as far as our midwives are concerned, we were already taking precautions in case the woman in labor is HIV positive. So now, we’re not going to be watching out for just her blood and her vaginal secretions, we have to worry about her droplets and her cough and her sneeze. So it’s a double worry.

And we have to resuscitate newborn babies, we’re giving oxygen to the mothers if they need oxygen. We have to make sure we don’t use the mask again for another woman because who knows? This one could be corona positive and we don’t want to infect the next one. It requires more vigilance. It requires being more alert, taking more precautions.

We don’t know much. This is an unknown beast.

Direct Relief: Some have congratulated Somaliland for doing such a good job of containing the virus. Do you think that’s right, or do you think it’s a question of under-testing?

Adan: I think we have no tests anyway. We’ve only had tests for the last couple of weeks. That’s one thing.

The other thing is that there’s been a [lot of] government activity and awareness raising. The universities, the schools have been shut down. Public transportation has been limited. Some shops have been closed.

I’m upset because I don’t know who’s coming to the aid of my people. And I think my people have been dealt a very unfair deal by the rest of the world.

Nobody has come to the help of the people of Somaliland. Or if they have, it’s been a little bit of humanitarian aid just to keep their consciences clear that they’ve helped somebody.