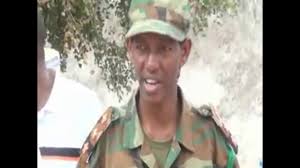 Security Forces on Thursday have killed a woman who was trying to blow herself up outside police station in Bardere town of Gedo region.

The woman has been reportedly dropped by car from Baidoa and threw a hand grenade outside the police station whereby security officers were on duty and was shot to death.

The security forces later discovered that she was wearing an explosive device and was intending to detonate inside the police station.

No group has claimed the responsibility of carrying out the attack but the Al Qaeda affiliated group of Al Shabab regularly carries out such suicide attacks.