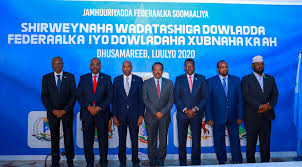 The partners welcome the leaders’ decision to form a technical committee to work out election modalities for the 2020 national elections.  As the committee’s work moves forward, broad-based agreement among Somali stakeholders will be necessary. The partners reiterate that the electoral process must move the country away from selection processes and toward direct elections, as codified in the Provisional Federal Constitution. International partners therefore urge all Somali stakeholders to pursue their efforts quickly to attain these objectives and keep the country on a stable political path, in the interests of the Somali people.

In addition to the electoral model, international partners also urge Somali leaders to agree on a plan to implement other aspects of Somali democratic reform, including the Constitutional Review, the formation of a multiparty democracy and creation of a functional Judicial Services Commission, Human Rights Commission, and Constitutional Court. They also underscore the need to ensure that candidates, parties, women, youth, minority communities and the media across the country can express themselves freely, especially during the election period.