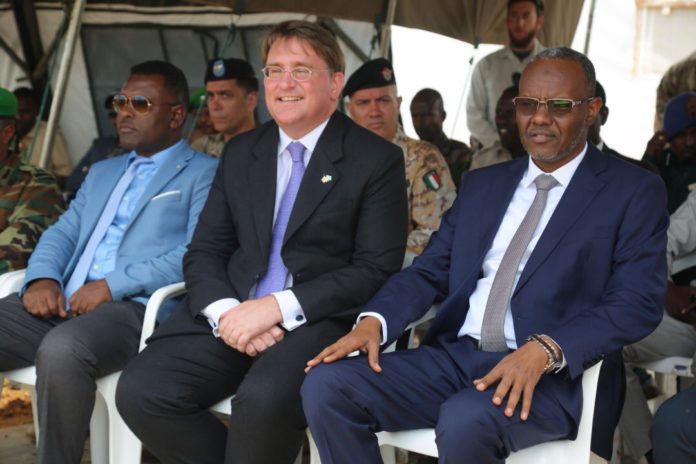 One hundred and thirty-four (134) Somali National Army (SNA) soldiers graduated on Wednesday from a UK-led training course in Baidoa, the capital of South West State in Somalia. The training is part of the UK’s ongoing efforts to strengthen the capacity of Somali security forces.

During the graduation ceremony, held at a UK- funded training facility in Baidoa, the SNA soldiers demonstrated the combat skills that they have acquired over the past two months which will help them to deliver lasting peace and security in Somalia. The training has equipped the soldiers with vital skills, including training in field-craft, leadership, human rights, first-aid treatment, patrolling and the delivery of defensive operations, to enhance their current capabilities.

“Congratulations to you all on successfully completing this important training. We hope the new skills you have learnt will be of great benefit to you as you join other men and women on the frontline to support long-term security in Somalia.”

“The UK is committed to helping build the capacity of the Somali National Army and Somali Police Force so that you will eventually be able to assume full responsibility for the nation’s security.”

‘Today is an important day for this joint Somali and British project and I congratulate all those who have made this possible and in particular, the 134 soldiers who stand before us today on this parade. It is their professionalism and dedication that has made this possible and it is they who will help ensure the Somali people will experience peace and prosperity in the years to come’.

In attendance was the South West President, Abdiaziz Hassan ‘Laftagareen’ who thanked the UK for the ongoing support to the Somali National Army. He said:

“I urge all of you to work hard and protect our country, please implement the lessons you have learnt during the training and pass on the knowledge to your colleagues. I would also like to thank the UK government for providing support to the Somali people”

The commander of the Somali National Army in Baidoa, Brigadier General Osman was also present and thanked the UK government and Commander Baynham for his dedication in ensuring a training centre is established.

The UK is supporting efforts to build the capacity and capability of Somalia’s security forces, ahead of transition to Somali-led security. Since January 2017, the UK has delivered training to over 900 Somali National Army soldiers. The training has focused on medical skills, leadership development, equipment care, logistics and the rule of law.