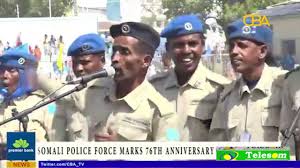 The Somali Police Force (SPF) today marked the 76th anniversary of its founding since it came into being.

The ceremony which was held in order to mark its establishment took place in Mogadishu, and other townships across Somalia.

Somalia’s Police Force came into being on 20th December 1943 which was set up by Italy, Somalia’s colony.

The SPF had seen tremendous revolutions as it recruited young and educated officers.

A statement from Villa Somalia congratulated on the SPF establishment anniversary.

The statement said that Villa Somalia is proud of the female members who have impacted change in the image of SPF.

A well organized event held at the Somali Police transport department commemorated those who were killed in line of duty.

The celebrations were delayed for technical issues and were supposed to be held yesterday.