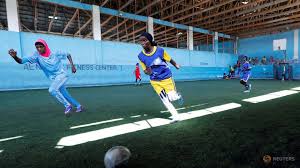 February 14 – The Somali FA has hit back at claims by Shaima Mohamed that funds were being embezzled by officials and not being used for football in the country.

Mohamed, who runs the Golden Club women’s academy in Mogadishu, has called on FIFA to investigate the federation and says that she has had to flee country after receiving death threats after she made the accusations.

Somali Football Federation communication director, Shafi’I Mohyaddin Abokar, said in a press statement: “It came as a surprise to us that we have learned that a woman claiming to be the head of women’s football has appeared in some media platforms arguing that she received death threats from the federation. Such habits are totally not in the football culture both in Somalia and elsewhere in the world.”

While Mohamed has been variously reported as being the head of women’s football in the country, the Somalis say she never held that position and no longer holds position within the federation, counter-claiming that she is looking for finance for her own football academy.

“Her baseless claims are against the principles and ethics of football which is a game of respect, love, friendship, integration and coexistence. She never headed SFF women’s football committee. Her mandate as a member of the committee ended in August 2018 and I can confirm that she had no responsibility within the SFF from the first day she appeared in the media on 3rd of January 2019,” said Abokar.

Mohamed told the Guardian newspaper: “I have no idea where the money goes… We do fundraising to support the teams. We do social media campaigns. We get contributions from the community but we don’t have a specific budget that comes to us every year. I have no idea where the money goes. I have no idea if the federation has sent details of my role and information to FIFA. We need formal recognition for Somalia women’s football.” She went on to say that FIFA should do more “to ensure we are receiving our funding.”

The Somali FA in its statement countered saying: “As far as we know, this woman runs her own private NGO called Golden Girls Sports Centre and the work of such an NGO has nothing to do with the principles of the beautiful game. Football is not a tool of generating
income for private GNOs.”

A FIFA statement to the Guardian said: “A small amount of the SFFs Forward funds have been used in the 2016-18 cycle for women’s football and women’s refereeing in the region. But we expect a greater commitment to be made in the new year with a dedicated Forward project for women’s football. We also understand that the SFF will appoint a new team to advance women’s football in Somalia. To that end the FIFA Regional Development Office in Addis Ababa will meet with the SFF soon to discuss the SFF’s plans.”