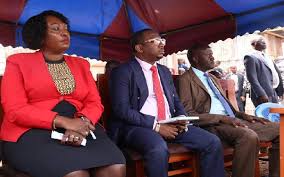 Sleuths on Monday arrested a suspect believed to be a Somali-Canadian national in Nairobi’s Eastleigh estate.

The foreigner, only identified as Abdinasir Abudule, was intercepted while conducting ‘surveillance’ on Kenya Defence Forces (KDF) Air Force base in Eastleigh.In a report, police said they were acting on a tip-off from members of the public after the suspect was spotted “going round taking pictures including those directed to the Air Force compound.”The officer on duty then alerted his team and it is then that they rushed to Joster Supermarket and managed to seize the suspect on arrival.Police say he had no identification on him.“His mobile phone, an iPhone make, was seized. It had several pictures and videos suspected to have been taken within Eastleigh area and are now kept as exhibit,” police said.The suspect is currently in police custody awaiting collection by Anti-Terror Police Unit (ATPU) who will conduct further investigations.

The incident comes as authorities are on high alert following a terror attack at a military base in Manda Bay, Lamu on Sunday morning, which left three Americans killed.