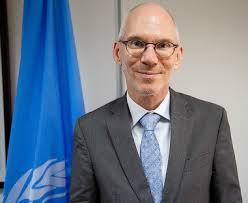 A suicide bombing in Mogadishu today was an assassination attempt on the UN Special Envoy to Somalia, an American diplomat, according to Shabaab.

Several people were killed or wounded when a Shabaab suicide bomber walked into the Mogadishu mayor’s office and detonated his explosives. Somali officials were meeting with the UN Special Envoy to Somalia, James Swan, prior to the attack.

According to the Associated Press, however, Swan and many others had left the building just minutes before the suicide bomber arrived. Other Somali officials were not as lucky, including Mogadishu’s mayor, who was reportedly rushed to a hospital in critical condition.

In a brief statement released on its Shahada News Telegram channel, Shabaab made it clear that the bombing was an assassination attempt on Swan.

“The UN Special Envoy James Swan, an American, survived an assassination attempt and many government officials were killed and wounded, including Mogadishu’s mayor, after targeting them in an explosion,” Shabaab’s statement said.

It was not immediately clear how the bomber managed to broach the mayor’s office.

However, today’s suicide bombing is further evidence of Shabaab’s ability to penetrate highly-secured areas of Mogadishu either by brute force or through bribery and corruption.

This remains a serious threat to longterm security for Mogadishu as Somalis and the international community work to improve the overall situation in Somalia.