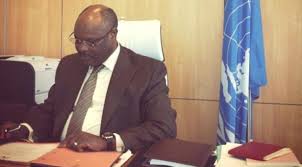 United Nations Secretary-General António Guterres announced today the appointment of Adam Abdelmoula of Sudan, as well as a national of the United States, as his Deputy Special Representative for Somalia, where he will also serve as the United Nations Resident and Humanitarian Coordinator in the United Nations Assistance Mission in Somalia (UNSOM).  He will succeed George Conway of Canada who served as Acting Deputy Special Representative of the Secretary-General, Resident and Humanitarian Coordinator since April, and to whom the Secretary‑General is grateful for his dedication and service in Somalia.

In his earlier career, Mr. Abdelmoula served as the Chief of Middle East and North Africa Section in OHCHR and held various assignments with the United Nations in Liberia, Iraq and Somalia.