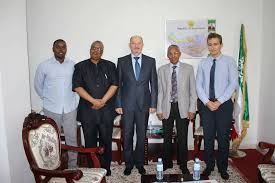 Contrary to rumors, the Russian Navy (RuN) will not establish a military base in the town of Zeila in northern Somaliland. The United Arab Emirates (UAE) will however soon operationalize a air-naval facility in Somaliland, as part of a wider strategy to secure the region’s maritime trade choke points.

1. Rumors about Russia’s plans to establish a military base in the self-declared state of Somaliland have circulated since April 2018. The story was first reported by Somali outlets and then picked up by the British newspapers Sun and Express , pro-Russian outlets such as Southfront, and a number of Twitter users. Recently, the claim featured in Kenya’s major newspaper Daily Nation. The reports state that Moscow will recognize the independence of Somaliland in exchange for permission to build an air-naval base in Zeila/Sayla on the border with Djibouti, which will host 1,500 Russian troops, warships, and submarines. A meeting between the foreign minister of Somaliland and a Russian diplomat is cited as evidence for the deal.

2. The story is almost certainly fake news, copied word-for-word from a Reddit post in the “Global Powers” role-playing thread, which was published 11 months ago. While the reddit post is still available , the Somali news outlets, which first spread the news, have since deleted their claims. 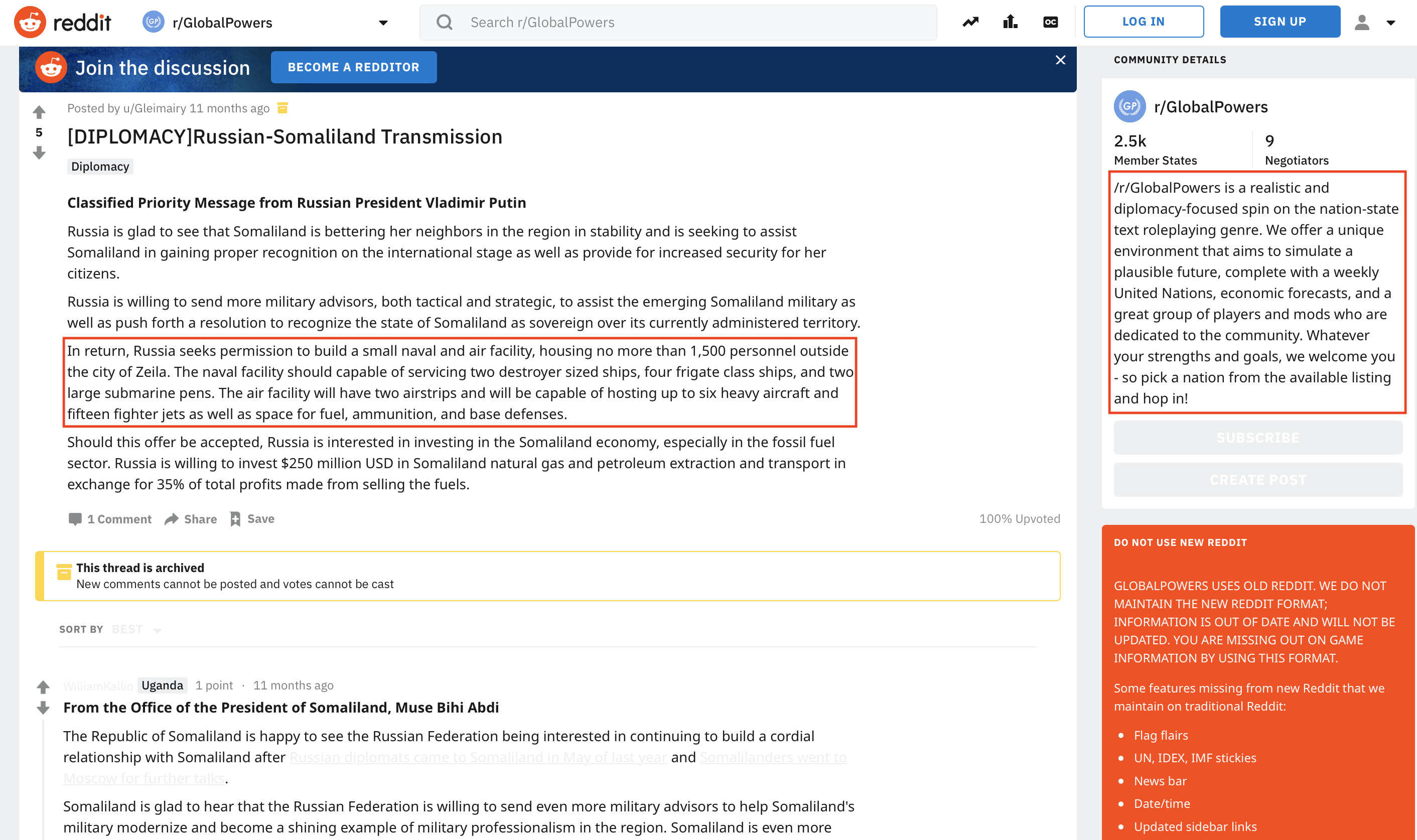 3. IMINT obtained via Sentinel-2 satellite reconfirms that the port of Zeila has not seen construction activity in the past year. If Russia indeed plans to build a naval base in the area, some newly built infrastructure such as naval peers, fences and asphalt layering or evidence of exploratory activity should be observable by now. 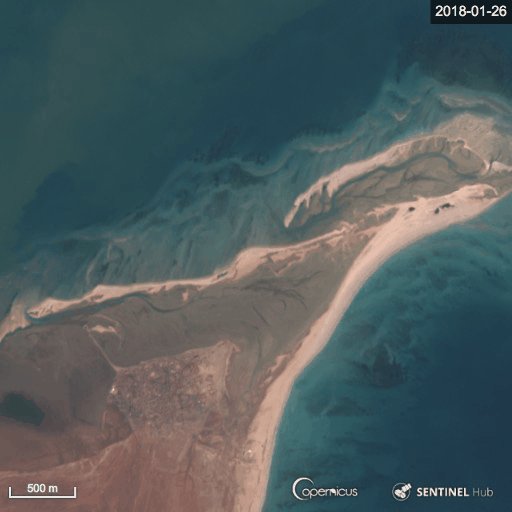 4. In the current political and economic climate, Russia is unwilling and unable to build overseas military installations from scratch. As the case of Syria (Tartus and Latakia) shows, Moscow generally prefers to obtain leases for Soviet-build airfields/ports and other existing installations, which already have a baseline infrastructure. As the RuN is undergoing a modernization and downsizing program, it is highly unrealistic that Russia will be able to establish and maintain a 1,500 men overseas presence, including surface and subsurface vessel, as the rumors suggest.

5. While Somaliland hosts a Soviet-built airstrip and harbor in the city of Berbera, the Parliament of Somaliland granted exclusive access to the UAE in May 2016. The 30-year concession authorizes the UAE to establish a 42 square kilometer base in Berbera, consisting of naval facilities and two parallel runways. The air-naval base is intended to support heavy aerial traffic and host various naval assets, including warships, to launch operations against the Iranian-backed Houthi militia in Yemen. The base is expected to become operational in June 2019.

6. As part of its maritime strategy, the UAE has also established military bases in Yemen’s main ports (Aden and Mukalla), Eritrea, and temporarily on Socotra Island. Through the Horn of Africa deployments, Abu Dhabi aims to secure the Bab el-Mandeb Strait, which represents a strategic choke point for oil transports to the European and North American markets. The Iranian-backed Houthis have conducted numerous seaborne attacks against commercial vessels transiting the strait, forcing Saudi Arabia to suspend oil shipments in the area. 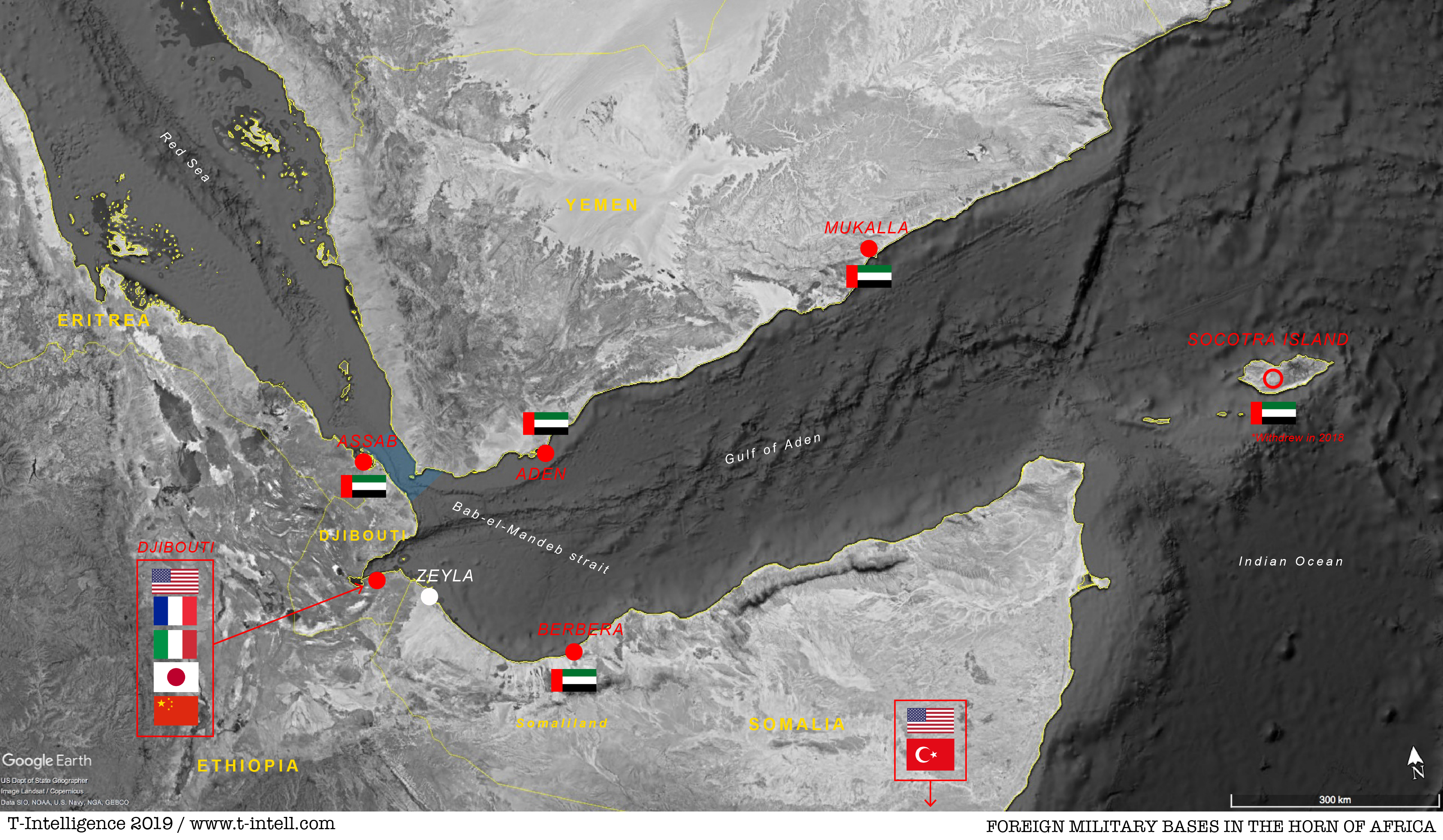 Foreign military bases in the Horn of Africa via T-Intelligence

7. The UAE’s presence in Somaliland is not limited to military interests. The Emirati  company DP World currently holds a 51% stake in the Berbera port and plans to invest $442 million. Abu Dhabi is expected to revamp the local civilian airport and build roads to Ethiopia. Emirati soldiers will train Somaliland’s coastguard to combat piracy and supply Somaliland with coastal surveillance systems, similar to capacity building programs in Somalia’s autonomous region of Puntland.

8. Since Berbera is unavailable as a Somaliland base (and the Zeila deal fake news), Moscow is seeking other options to gain a foothold in the Horn of Africa region. Russia and Sudan are reportedly discussing the establishment of a “naval supply center” on the Red Sea coast. In fall 2018, Russian Foreign Minister Lavrov furthermore announced plans to establish a “logistics center” on Eritrea’s Red Sea coast. While Lavrov did not provide specifics, possible locations include the ports of Massawa and Assab, which offer strategic access to the Bab el-Mandeb Strait. The UAE already operates a air-naval installation in Assab.

9. The establishment of small logistics facilities in the Horn of Africa region could provide critical operational support for Russia’s expanding military and commercial interests in Africa and allow Moscow to compete with its Western adversaries, while keeping the initial investment and footprint low. This approach fits within Russia’s overall Africa strategy, which relies on politically deniable subversive operations spearheaded by irregular assets such as private military corporations (PMCs) and intelligence agencies.