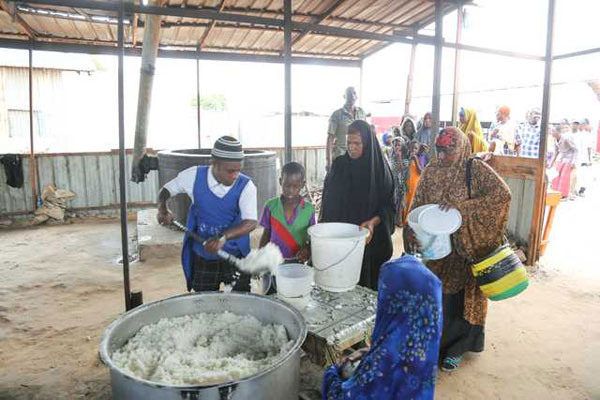 Somalia’s image, has for decades, been associated with persistent insecurity, food shortage and institutional collapse, but evidence now abounds that the country was making progressive strides.

Somalia watchers must be waiting anxiously as the country hurtles towards the 2021, the regionally agreed deadline for the transition to a constitutional democracy.

According to the UN Office for the Coordination of Humanitarian Affairs (UNOCHA), at least 4.2 million Somalis still face food shortage and about 2.9 million more remained displaced within their own country due to insecurity or erratic weather.

Just a week ago, terrorists laid siege on a hotel in Kismayu, breaking a long period of relative peace in the city since the Al-Shabaab fell to Kenya Defence Forces (KDF), supported by their Somali counterparts in 2012.

When President Mohammed Farmaajo came to power in February 2017, he was a realistic assessor of the situation.

“Our government is facing so many challenges and even though I will be doing my best, I also want to make it clear for the Somali public that due to limited resources, what we could do is going to be limited,” he said on his inauguration, reminding the public the problems may need a longer period to resolve.

So what is the fate of Somalia two years later?

Many of the problems, like corruption and insecurity, still face Mogadishu. President Farmaajo’s defining decision upon election was the appointment of Prime Minister Hassan Ali Khayre, a former oil executive and himself a former refugee, who had fled his country for safety. His return to serve, alone, signified a change in perception about the new leadership.

Now the head of the government, Mr Khayre could be the cog that ties key institutions and improves priority areas such as justice and security, inclusive politics and socio-economic and human development. Is it too early to give a verdict?

Perhaps not. Nobody expected Mr Khayre to turn it around overnight. Yet there has been a roadmap laid specially for turning around the view of global institutions about Somalia.

From buttressing the Somali Central Bank which had been rebuilt in 2013, the government received the first grant of $80 million from the World Bank in September last year, signalling the first batch of financial assistance from the institution in 30 years.

The World Bank had suspended ties with Mogadishu in 1991 following the war. The World Bank had not directly funded the Mogadishu government since, although there had been monies channelled through humanitarian organisations since 2003. The latest disbursement will be used for institutional reforms.

Last Friday, the Africa Development Bank (AfDB) approved $28.86 million for water and sanitation and roads projects. The grants, consisting of $11.99 million from AfDB’s Transition States Facility (TSF) for an urban water and sanitation project for the Kismayu and Baidoa towns, and $16.86 million for the rehabilitation of roads, were part of it’s role to “tackle fragility in the Horn of Africa,” it said in a statement.

But it signals an overall changing of perception about Somalia. A major problem in the past has been lack of institutional memory. Traditionally an oral society, Somalia has also rarely re-elected a president. In fact, no one has won back a seat during the last two decades of transition.

The roadmaps, mainly the work of Mr Khayre, could therefore enable successive administrations to carry on with any unfinished businesses in the guidelines, policies and strategic plans that have been put in place.

There is a tight deadline, especially on the constitutional review, part of the Transition programme, with specific outlines on roles of the central and the federal governments.

SECURITY
The prime minister, in past public comments, said the security sector reform is his pet project. Yet reforming it remains an uphill task. The government’s comprehensive roadmap he published earlier included training forces, establishing proper laws, especially on human rights, and taking over the duties of African Union forces (Amisom).

The government is currently implementing a programme called the National Security Architecture, which aims to establish lean, professional, accountable and sustainable security organs.

Earlier this year, Mr Khayre announced a project for documentation of the official members of the National Armed Forces, their positions and ranking, as a key step in professionalising the military, and attracting skilled recruits. Somalia’s partners such as Turkey, the US and the UK may help strengthen that by offering training.

Recently, the Somali Special Forces, known as Danab, dislodged the terrorists from the strategic small bridge town of Sabiid. They have also liberated Barire town and continue to seize more territory. Danab is US-trained.

Somalia may have got new leadership, but still faces old problems. The usual motivations for joining the militants remain. Military offensives will now have to be supplemented by efforts to counter extremist ideologies.

The government must focus on infrastructure development, debt relief programme and the mobilisation and promotion of domestic revenue.

Abdullahi Sh Nor lectures at the University of Somali, Mogadishu (abdikadiralmond@gmail.com)