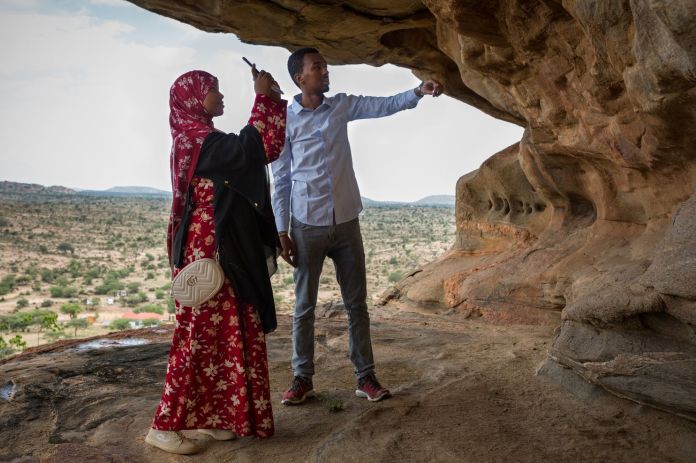 Leaders in the breakaway region of Somalia say the international community faces a stark choice: Recognize their independence, or see invaluable history of humankind disappear

LAAS GEEL, Somaliland — The cave walls here are alive with masterpieces of ocher on sandstone, our oldest paint on our oldest canvas.

It is safe to say the ancient pastoralists who created this exquisite rock art thousands of years ago did not envision its use by a breakaway region of Somalia to campaign for international recognition as an independent state.

Yet their works have been drawn into a heated debate among politicians, archaeologists and others over the place of ancient heritage in arguing for the separation of Somaliland, a semiautonomous region of Somalia that has had its own military, currency and flag for 30 years — a very short while, in the grand scheme of things.

Somaliland’s government has vigorously sought recognition through diplomacy but has failed — except recently with another recognition seeker, Taiwan. A recent flurry of diplomatic effort across Africa began in Kenya, where Somaliland’s president won a promise of a consulate and direct flights by March, but no explicit acknowledgment of his region’s independence.

Out of that failure, the heritage argument has gained steam, and it comes off almost as an ultimatum: Without the ease of access and funding that recognition would bring, the world risks the disappearance of invaluable monuments to humankind such as Laas Geel’s paintings.

“With independence, a world of funding and tourism would open up to us,” said Mohamed Ahmed Mohamoud Awad, Somaliland’s investment minister. “Without independence, all the history we offer the world will go extinct. Somalia will drag us down with it.” 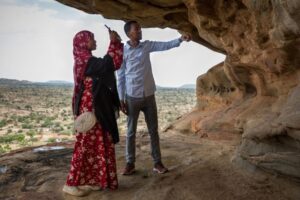 The embers of the civil war that led to Somaliland’s declaration of independence in 1991 are still hot throughout most of Somalia. A succession of weak, corrupt governments in Mogadishu have only pushed Somaliland farther away, deepening the sense of divergent paths. In nationwide elections planned for this month, for instance, there is no trace of Somaliland’s participation.

Foreigners in Somaliland can move about easily; in the rest of Somalia, they rarely leave heavily militarized green zones. Al-Shabab — the Islamist extremist group that controls most non-urban areas in Somalia and carries out bombings, kidnappings and assassinations daily — does not have a sustained presence in Somaliland. Awad, who drives his own car and waves to passersby, scoffs at counterparts in Mogadishu, the Somali capital, who travel in convoys of dozens of bulletproof vehicles. 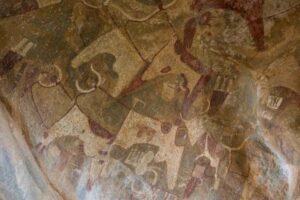 The images on the cave walls at Laas Geel include silhouettes of wild animals that were plentiful in the landscape 5,000 to 10,000 years ago, when the art was made. (Mustafa Saeed for The Washington Post)

At Laas Geel, newly graduated government-supported tour guides see it as part of their mission to rectify what one called “the great misunderstanding”: that Somaliland and Somalia are the same.

“Our ability to preserve history, like these paintings, and their inability to, is our greatest argument for recognition,” said Ahmed Yasin, 27. He stood beneath ritualistic depictions of cattle slaughter and silhouettes of wild animals such as giraffes that were plentiful here 5,000 to 10,000 years ago, when the art was made. Many of the paintings were partly erased, either by human interference or weathering. 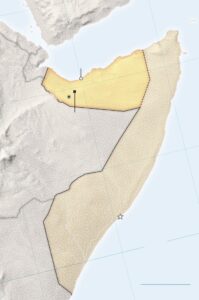 Somaliland relies on Somalia for little domestically, but when it comes to securing international funding, it is almost entirely dependent. Other governments and the United Nations are hesitant to directly engage with Somaliland officials for fear of alienating an already weak government in Mogadishu that needs all the help it can get.

Few experts doubt that a site such as Laas Geel already would have been a UNESCO World Heritage Site if not for the political sensitivities.

“Everyone agrees it is worthy,” said Jama Musse Jama, who runs the Hargeisa Cultural Center in Somaliland’s capital and convenes an annual book fair that drew nearly 10,000 attendees in 2019. He has received funding to digitize heritage items ranging from 1,000-year-old manuscripts to molding cassette tapes from the 1960s and ′70s, and to create three-dimensional mapping of Laas Geel.

“We might lose this extraordinary place because of the stupidity of politics,” he said. “Somalilanders won’t allow Somalia to apply to UNESCO on their behalf, and Somalia wouldn’t do it anyway.” 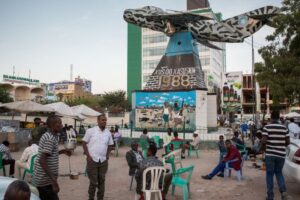 The Hargeisa War Memorial in Somaliland’s capital, Hargeisa, commemorates the region’s attempt in the 1980s to break away entirely from Somalia. (Mustafa Saeed for The Washington Post)

Many Somalilanders feel a deep resentment toward Somalia dating at least to the late 1980s, when then-ruler Mohamed Siad Barre launched a systematic bombing of Somaliland, trying to quash political opposition and ultimately killing tens of thousands, decimating the economy and traumatizing the population.

When Barre’s government collapsed in 1991, Somaliland declared independence. Global powers, particularly the United States and the European Union, have tried for decades to prop up weak governments in Mogadishu. Somaliland has been able to access unofficial diplomatic channels with only a few Western, Arab and East African capitals.

“I don’t think any of the major world powers are looking to recognize Somaliland anytime soon,” said Omar Mahmood, a senior Somalia analyst at the International Crisis Group. “Now that Mogadishu has secured debt relief negotiations with international lending institutions, there’s an increasing level of international assistance that will be channeled through Mogadishu, allowing it more leverage than before.”

“Somaliland has put forward the narrative that they were genocidally attacked,” he said. “Somali society hasn’t reconciled what happened 30 years ago, and there’s lots of sensitivity and trauma. Without taking that step, moving toward each other won’t happen, no matter how much they are pushed.” 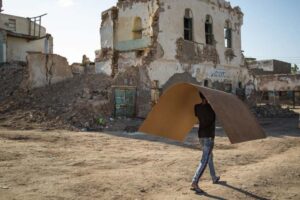 A street in an older part of Berbera, Somaliland, on Oct. 4. (Mustafa Saeed for The Washington Post)

The co-opting of sites such as Laas Geel into those contentious political debates has worried the archaeologists who study them. Politics is often impatient and simplistic, whereas archaeology seeks truths that might transcend our modern nationalisms.

Sada Mire, a Somali Swedish academic, archaeologist and author of books on the Horn of Africa’s ancient cultures, has studied Laas Geel in intricate detail.

“It is always less clear-cut than people outside of this field will tell you,” she said. “What does Laas Geel tell you about modern Somalis or Somalilanders? Well, there are continuities and breaks and similar and dissimilar ways of expressing their lifestyles between 5,000 years ago and now. There are endless ways of depicting the great circle of life, and at Laas Geel, you can see many of them, even superimposed on each other.”

Particularly worrying to Mire is Somaliland’s lack of a national museum of its own or any kind of legal framework for heritage preservation. Foreign archaeologists would not find it difficult to do work in the region and cart away whatever they found.

“They could just come in and dig test pits like it’s colonial times,” she said. “They are the ones who have the resources, and Somaliland is looking for more international exposure. But it would be extractionist and opportunistic.”

Mire and other cultural preservationists in Somaliland aren’t just worried that politics might endanger the region’s heritage, but also that to politicize such sites is to fundamentally misunderstand them. Somaliland’s heritage is a testament to its place at the crossroads of many cultures.

The centuries-old city of Berbera, for instance, where 6,000 camels a day once arrived from the Ethiopian interior carrying frankincense and coffee, is still home to dilapidated Egyptian- and Ottoman-style architecture. On a recent day there, a 20-man fishing crew from Tamil Nadu in southern India was fixing its netting, days before setting out to cross the Arabian Sea back toward home after a 10-month stay. 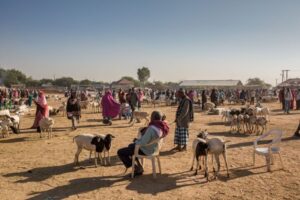 At the livestock market in Hargeisa, seen in October, animals including thousands of camels are bought and sold every week. (Mustafa Saeed for The Washington Post)

In Hargeisa, thousands of camels are still bought and sold every week at a bustling fairground. In clubs on the outskirts of the city, young men and women mix somewhat scandalously for this conservative country, dancing to English- and Arabic-inflected karaoke. Traces of Italian colonialism are evident on the menu.

Even the people who painted at Laas Geel are likely to have roamed far beyond modern Somalia’s borders, sharing a culture evidenced in similar rock art as far away as modern-day Sudan.

In an interview at an oceanside restaurant, the mayor of Berbera, Abdishakur Iddin, said that preserving heritage is a priority but that developing the economy for people who live there comes first, and also that doing both simultaneously is a challenge.

“We want to reconnect to the world, the way we were in the past when this was a trading city,” he said. “But if you come back in 10 years, you might not recognize this city. We would like to protect our heritage, but we need more funds, more tourists, more help.” 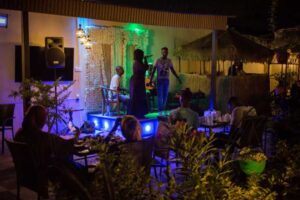 Juwayria, a local singer, performs in a restaurant in Hargeisa in October. (Mustafa Saeed for The Washington Post)

The largest share of funding for heritage protection in Somaliland comes from the European Union for the preservation of the rock art at Laas Geel. The site should be an argument for integration with, not separation from, Somalia, said Nicolas Berlanga, the E.U.’s ambassador to Somalia.

“Laas Geel shows people that there is a long history before what difficulties we have now,” he said. “The idea of restoring it and promoting it is to get Somaliland and Somalia to work together. We must find discrete windows for collaboration like this. The final goal for everyone is recognition by UNESCO. It could be a great success.”

Regardless of whether the E.U.’s push for integration or Somaliland’s push for separation succeeds, hundreds more rock painting sites around Somaliland receive little to no attention.

In the hills south of Berbera, an elderly man named Muse ’Aw Saeed led visitors to another cave, one seldom seen by outsiders.

“We used to play hide-and-seek here as kids,” he said. “It was much more vivid then. There were animals with long snouts. Those are already gone.” 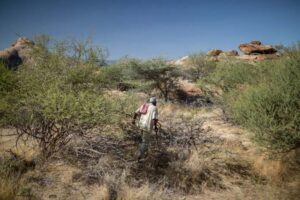