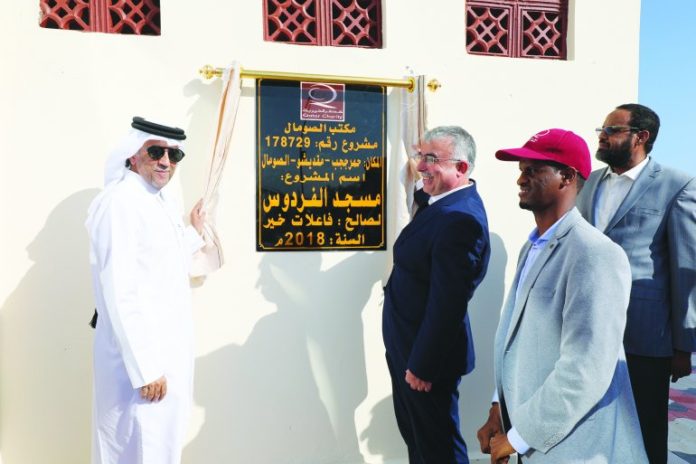 Qatar Charity, with the support from the people in Qatar, inaugurated a mosque in the Somali capital of Mogadishu, in the presence of Ambassador of Qatar, Hasan Hamza, and Ambassador of Turkey, Mehmet Yilmaz, in addition to many local officials and residents of the region.

The people attending the inauguration ceremony praised the role of Qatar Charity in implementing such model projects that people need in their lives, expressing their happiness at the opening of the mosque in this coastal area inhabited by a large number of Muslims, with few mosques.

The  mosque, built in an area of 320 sqm , is located inside the women and children hospital known as the Yardimeli Hospital. It was built at an estimated cost of over QR350,000. The mosque, which accommodates more than 500 people, also has a prayer space for women, in addition to toilets and places for ablutions.

The construction work of the mosque took 18 months. Now, it is available for medical staff, patients, visitors, and residents of the areas neighbouring the hospitals. It is the largest mosque built by Qatar Charity in Somalia so far. Earlier, nearly 28 mosque projects have been implemented in the country.

Previously, Qatar Charity has donated an ambulance to the hospital in early 2018 to contribute to saving lives and meeting the needs of hospitals for the ambulance.

It is worth mentioning that Qatar Charity seeks to improve education in Somalia, as it has already completed the implementation of several multi-service projects, including school projects.

Recently, Qatar Charity opened the Dar es Salaam Primary School in the city of Garowe to benefit 400 students. The project aims at supporting education in Somalia, contributing to increasing the literacy rate, improving education facilities, and creating generations capable of participating in the development of the country.

In 2017, Qatar Charity also opened multi-service centres in the country. In the same year, a specialised agricultural school was opened in Afgooye, a town in the southwestern Lower Shebelle region of Somalia, which is the first-of-its-kind in the region.