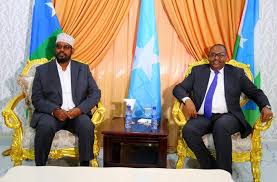 Two of Somalia’s Federal State members have reportedly skipped the Somali Partnership Form which is due to kick off in Mogadishu today (Tuesday).

The Somali Federal Govt has sent an invitation to Puntland regional president,Mr. Said Abdilahi Deni but said that he will attend the SPF once his Jubaland counterpart is invited to the Forum.

The SFG and Jubaland are locked horns after the Somalian govt has refused to recognize the reelection of Mr. Ahmed Mohamed Islam alias Madobe for his second term.

Hirshabelle, the SouthWest and Galmudug state leaders are expected to participate the SPF which is due to open in Mogadishu later today.