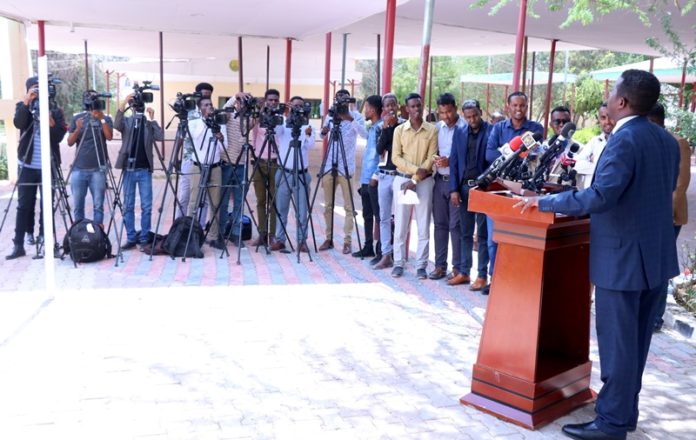 Mr. Mahmoud Warsame Jama, the Presidential spokesperson in a press conference held today at the Presidential Palace cleared the air on the issue regarding the extradition of Somaliland born businessman GSK company, Ahmed Osman Geelle

In a press statement read by the Presidential spokesperson stated as follows:-

Mr. Ahmed Osman Geelle, owner of GSK company took a loan from the French Bank of BCI Mer Rouge, part of the French BRED bank, which is a subsidiary of the International Bank of the BPEC. The money was used by the GSK in the construction of Coca-Cola factory in Somaliland.

GSK’s owner, Ahmed Osman Geelle, received a loan from Djibouti as a Djibouti citizen, and later moved to Somaliland whereby he is currently settled.

The President of the Republic of Somaliland in his capacity intervened and appointed a Committee of Foreign Affairs and International Co-operation. Sacad Ali Shire, former Central Bank Governor Mohamed Abdi Ibrahim and Somaliland Police Chief Abdillahi Fadal Iman. The French bank requested the GSK to pay the debt in installment as per stated in the loan agreement.

GSK owner Ahmed Osman Geelle, acknowledged that he took the loan from the French bank, but he argued that part of his wealth and his assets were confiscated in Djibouti and that he could not go to Djibouti because of existing differences with the Djiboutian government. As a result, he was hesitant to accept that he would pay the debt as the French bank demanded.

On February 15, 2018, the French ambassador to Kenya , Ambassador Antoine Sivan, who is in the French and Djiboutian courts’ decision on the bankruptcy of the French bank, tells GSK owner Ahmed Osman Geelle . He also said that a complaint against GSK has been submitted to the “INTERPOL” International Police.

After a long debate, it was agreed upon that debt collection would be carried out in the Somaliland courts, without consideration of any decision made by the French and Djibouti courts. The businessperson Ahmed Osman Geelle was advised to repay the loan after all he agreed to taking the loan. However, the entrepreneur was unwilling to pay in good faith.

As a result, the French bank employed the services of Somaliland based lawyers, who had begun to prepare notes and letters of credit to the French bank-claiming businessman Ahmed Osman Geelle had defaulted on his loan. In accordance to the International norms, all the letters issued by the French and Djibouti governments must go through the Ministry of Foreign Affairs and International Cooperation and the Ministry of Justice of the Republic of Somaliland for verification and to ensure that these documents have been officially issued by governments of France and Djibouti, the state of their own name. It is an international way of ensuring transparency and accountability across states.

Unfortunately, the owner of GSK’s, Ahmed Osman Guelleh, instead of repaying the outstanding debt resorted to taking the following steps:

His course of actions has in turn created misunderstanding and animosity among his clansmen. The owner of GSK , Mr. Ahmed Osman Geele by doing so has intently sidestepped the rule of law, incited and above all endangering the national security, and dented our good national image by making the country a refugee for those swindlers who rip-off international financial institutions and Banks.

Mr. Ahmed Osman Geele, in person publicly acknowledged that he owes the debt to the bank and yet still he is an international fugitive running from INTERPOL.

The Government and people of Somaliland are seeking international recognition thence circumvent any acts which are in breach of the rule of law and is not a safe haven for fraudsters who seek to swindle the wealth and property of other people places in the world.