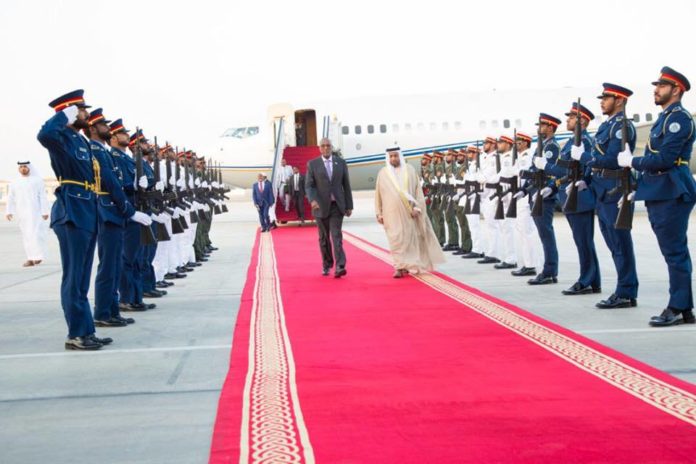 Hargeisa-The President H.E. Musa Bihi and his delegation jetted into Abudhabi shortly after they left the country today for the Gulf Country of the UAE on an official trip following on invitation by the Emirates monarchy.

On arrival he was highly received by monarch Justice Minister Sultan Bin Saeed Al Badi Al Dhaheri whereby an army guaride was mounted to his honour.

The Spokesperson of the Presidency Mr. Mohamud Warsame Jama said in his brief after the President’s departure that the trip which would be for a few days is based on the bolstering of the historical bilateral relationships between the two countries.

He further stated that the bilateral relations existing concerned major developmental aspects, and both politics and commercial trades. It is expected that the President and his entourage will hold several meetings with senior UAE officials in their trip.

The Dubai owned DP World took over Berbera Port management hence is slated to indulge in various and numerous development projects and the UAE itself is currently building a major military base in the coastal town of Berbera.

During his departure the Head of State was escorted by the service commanders, Hargeisa mayor and several senior government officials.  He boarded a chartered plane courtesy of the UAE monarchy leader.