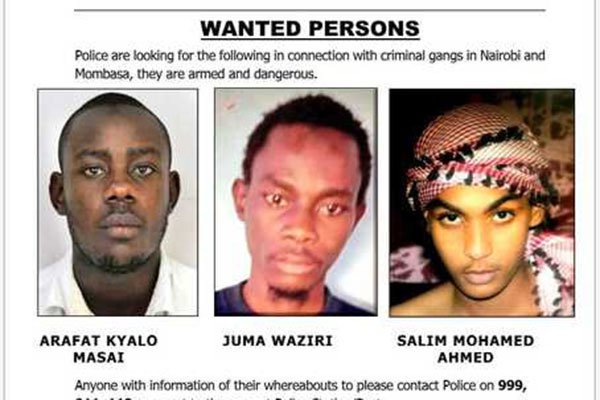 Police on Tuesday released the photos of Arafat Kyalo Masai, Juma Waziri and Salim Mohamed Ahmed, saying they are armed and dangerous.

“Anyone with information on their whereabouts to please contact police on 999, 911, 112 or report to the nearest police station or post,” said a statement signed by police spokesman Charles Owino.

The Nation has learnt that Waziri and Ahmed are terrorism suspects from Coast and were once said to have joined Somalia-based militant group Al-Shabaab.

The two were among Shabaab operatives believed to have escaped a police dragnet in Ng’ombeni, Kwale County, in March last year.

This is after a contingent of police officers, including those from the Anti-Terrorism Police Unit, raided an isolated house in Mvakani village that was said to be the suspects’ hideout.

It later emerged that leaked information from within the police service compromised the raid, which had been prompted by several attacks in the South Coast.

The group of operatives, which Waziri and Ahmed were said to belong to, had been terrorising residents of Likoni in Mombasa and Kwale County.

The gang was linked to a spate of robberies targeting M-Pesa shops and other businesses in Kwale.

After the gang leader Mohamed Rashid Mwatsumiro, alias Modi, was gunned down in September, police revealed that the group was behind the killing of village elder Bakari Dondo and Muslim cleric Shee Fumbwe in Mabokoni, Msambweni Constituency.

After undergoing training, Modi and Mahir are said to have returned to Kenya late last year.

Modi assembled a criminal gang and radicalisation network in Kwale, while Mahir was involved in planning the DusitD2 attack.

The two are said to have been influenced to join the terrorist group by radical clerics Aboud Rogo and Abubakar Sharif, alias Makaburi, whom they said recruited for Al-Shabaab.

Rogo was killed in 2012 and Makaburi in 2014. Ahmed is on the list of those said to have joined the terror group at the time.

Said was killed in Bamburi, Mombasa County, in 2017 after vanishing from home for three years.

The other suspects are believed to be at large, police reports suggest. The search for them is still on.

Meanwhile, security agents have, in the recent past, raised the alarm over involvement of terror suspects in organised crime.