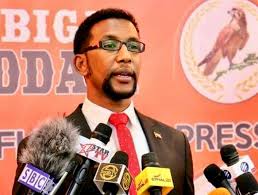 Mr. Barkhad has spoken to the local press insisting on the happening of planned protest that Wadani party chair, Mr. Irro has announced on Sunday.

The protest is scheduled to take place tomorrow.

The spokesman has accused the gov’t of deploying police and took control of its headquarters located in the east of the capital.

The police did not so far confirmed the detention of opposition spokesman.