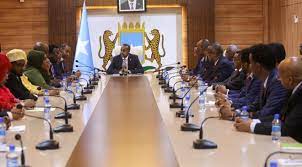 Somalia’s PM Mohamed Husein Roble on Tuesday has declared a state of emergency and called on Somali business people and the int’l community to contribute to efforts aimed at mitigating the crisis.

The PM said in a tweet that the country is in a state of dire humanitarian emergency.

Roble said: ” I call upon all Somalis, business people, religious leaders, the diaspora and the int’l community to make concerned efforts to significantly contribute to mitigate the suffering of those affected by the drought.

The UN said on Friday that 2.3 mln people were already suffering with serious water, food and pasture shortages in Somalia, warning that a rapidly worsening drought could lead to an extreme situation by April next year.

The statement added that climate projections show that the country is facing a fourth consecutive failed rainfall season.

The UN said that it is imperative to act now to prevent a slide into the kind of of drought and famine and famine condition in the Horn of Africa nation experienced in previous years.