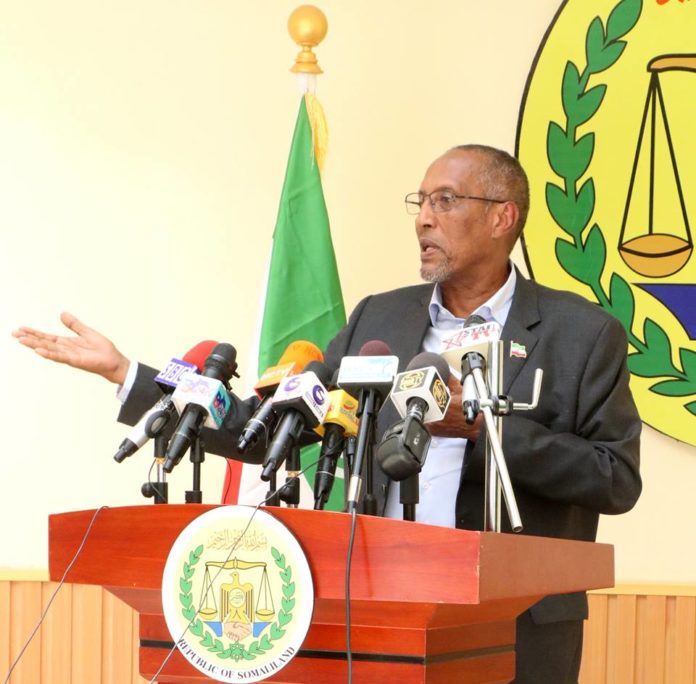 The President H.E. Musa Bihi Abdi has stated categorically that the opposition leaders have expressed sentiments that are detrimental to the peaceful stability and solidarity of the nation hence undermining the electioneering processes in the country.

The President gave the statements at a press conference he had at the presidency yesterday whereby he pinpointed the progressive developments taken in the country and what is in store for the future expectations.

The Head of State mainly focused on three sensitive aspects that have been in the media spotlight for the past several weeks.

First and foremost is the upcoming general election for the civic and parliamentary assemblies, the touted so called tribal conferences and thirdly is the foreign sponsored scholarships that have been widely alleged to have been awarded un-justifiably.

The President highlighted the fact that the 2019 elections would have had all its needs and procedural trappings in place has it not been for the Wadani political party that has put a hurdle in place.

The President started by explaining that experiences earned from the past five general elections has taught the nation that 10 months are needed for the best and optimal preparations before people go to the polls.

He pointed out the fact that they process of preparation demanded the aspects of legalities and planning, funds and review reports from political parties to be in place before hand.

He explained that as for the planning and legal issues which was the work of the National Election Commission and state whereas the planning was in the NEC docket, the needed legal issues concerning elections e.g. the gender and minority portions were already addressed by the state and have been sent to the national parliament.

He added that other quota needs (geopolitical) was a matter incumbent upon the parliament to deal with.

Secondly the 16m USD needed for footing the bills of both the parliamentary and civic elections has 4m USD earmarked to be disbursed by the state whereas the remaining 12m USD was to be granted by the International Community who are partners in the facilitation of the process.
The President declared that as for the government’s part of the bargain, they had already disbursed half ofthe money needed way back in March hence are ready to pay the remainder as scheduled.

The third aspect, the president said, was the tabling of the review report by the political parties about (and on) the immediate past elections such that issues arising may be addressed by amendments (if need be) as per recommendations of the concerned parties and stakeholders associated.

The President observed that Kulmiye and UCID political parties plus all other stakeholders e.g. IC, CBOs etc had already tendered theirs whereas the Wadani party has not done so to date.

He further lamented that both political parties have declared the need to hold tribal conferences to address political issues.

He was categorical that it was against anything that would be retrogressive to the aspirations of the nation that would curtail the developments achieved.

He unequivocally declared that the electioneering process has been held hostage by Wadani.

As for the educational scholarship awarded to Somaliland the President said that it was un-called for the heads of the political parties to cry foul in a manner that causes discord instead of seeing to it that the minister or concerned officials are approached to address the matter.

He said that the manner in which they commented on the scholarship issue was not sincere but calculated to plant seeds of discord amongst the populace.

He said that for an opposition leader who commands the support of 40% of the country’s population to opt for tribal meeting was tantamount to breaching public security order as it was totally against the constitution.

The Head of State noted that the demand of the opposition political parties, especially Wadani, to want the removal of the whole of the NEC members was a tall order.

He said that the party had a bone of contention with the presidential results and advised the party to go to court.

He explained in details the intricate nature of deposing national electoral commissioners hence depicted it as legally quagmire.

The President was categorical that the country had the appetite for developmental progress and was not ready to have what is retrogressive as tribal conference especially when constitution is in place.