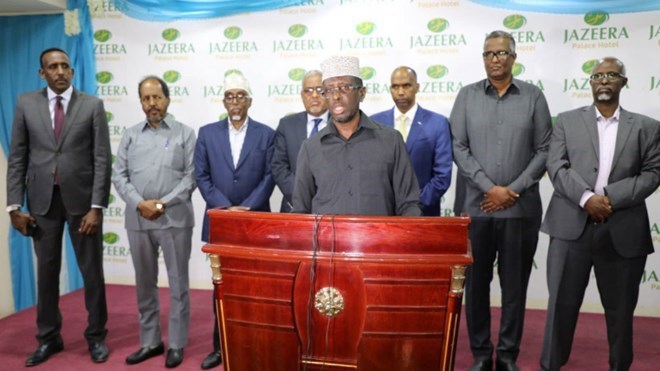 The Council of Presidential Candidates which brings together opposition groups have on Wednesday called on Somalia’s embattled President Mohamed Abdillahi Farmajo to leave Villa Somalia’s Presidential palace in Mogadishu.

The opposition have also demanded that the incumbent president must face criminal charges against him over the failed coup attempt.

The move comes barely a day after the Prime Minister Mohamed Husein Roble said he survived a coup attempt orchestrated by the president.

The power struggle between the top leaders escalated over an attempted suspension of the PM’s powers.

The opposition leaders said in a statement that the council demands that Farmajo must vacate Villa Somalia to bring an end to disruptions and plots he continues to orchestrate inside the house.

The opposition condemned an alleged attempt by the president to seize power through military force.

They demanded an investigation must be conducted against the president in his involvement of the failed coup attempt and those that aided him.

Farmajo’s spokesman has dismissed claims by the PM that Farmajo had organized the coup to depose the government and troops deployed to takeover Roble’s office.