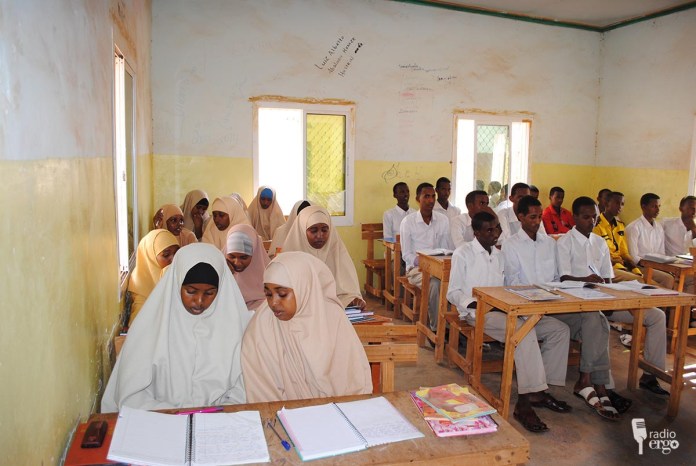 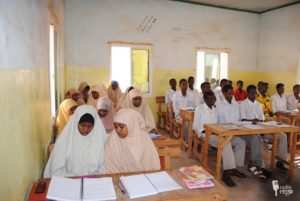 A new primary school has opened in the village of Hayira, 80 km east of the town of Burao in Somaliland, giving free education to the children of nomadic pastoralists.

The school opened on 28 august 2018 and has 120 students aged between seven and 12. There are dormitories where the students can stay while their families migrate away from the area in search of water and fodder for their livestock.

All the students in the school are from pastoralist families, whose livelihoods have been seriously eroded by the last three years of drought.  Some come from families who migrated to Hayira during the drought after being displaced from other parts of the region.

Those who could afford to educate their children used to send them to schools in Burao town, where they would stay with relatives.

Awil Ali Khaliif has two children in secondary schools in Burao.  He told Radio Ergo that he has enrolled his younger five children in the new local school, which provides a welcome service.

“We no longer have to worry about education,” said Awil, a father of nine children. He has a small herd of 30 goats that survived the drought.  His income has been greatly reduced.

Idil Suleiman Aden, who has five children, registered her two sons aged seven and 10 at the school.  She told Radio Ergo she had no money to send them to Burao.  The fact that the school is free is a great boost. Idil’s family has only 13 goats remaining after the drought. She earns a humble living from the sale of charcoal along the road from Burao to Erigabo, earning 10,000 Somaliland shillings ($1) on a good day.

Suleyman Ismail, the school director, said the diaspora community has donated a monthly budget of $5,000 to provide tuition and learning materials and uniforms.

Only 22 of the current students are girls. Radio Ergo’s reporter said most parents indicated that they  need their daughters to help at home with domestic chores while they earn a living or herd the livestock.