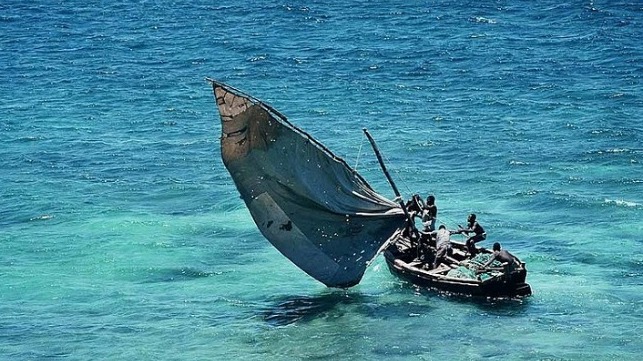 Comprising one-fifth of the earth’s population, China consumes more than a third of the fish pulled from the planet’s waters. With its demand outpacing supply, fisheries from China have joined other nations and set their eyes and their nets on African waters without concern for sovereignty or law.

Africans struggling to emerge from poverty are paying the price for these predations. Mozambique alone has lost 300,000 badly-needed jobs and as much as $3.3 billion in revenue – 10 times the amount East African nations make in legally licensing fishing by foreign vessels, according to the non-profit Stop Illegal Fishing.

Of the 130 vessels licensed to fish off Mozambique, only one belongs to Mozambicans. Many more foreign vessels are unlicensed. Without adequate patrol boats, Mozambique authorities can’t monitor, protect or enforce the laws on their own territorial waters.

It didn’t have to be this way. In 2010, Mozambique took action to assert greater control over its fisheries by commissioning a modern fishing fleet and a coastal security system. Its government set up an offshore patrol arm, a tuna-fishing corporation and the operating company for a domestic shipbuilding and repair facility. But not long after former President Armando Guebeza attended the ribbon-cutting for these entities in the fall of 2014, his government stopped responding to the contractors who delivered the ships and the training and then defaulted on a bond issuance taken to finance the forward-looking program.

It is unclear what was behind the short-sightedness by Mozambique’s government, but it was a discouraging turn for African countries that are trying to stand up for themselves in the face of foreign fishing. The capacity and the political will of African nations to combat illegal fishing varies from country to country.

On the West Coast of Africa, Sierra Leone has only one patrol boat for inspecting fishing in its waters. Following a BBC investigative report this spring on how Chinese trawlers were using prohibited tactics to scoop up thousands of tons of its fish, Sierra Leone banned Chinese fishing for a month.

In East Africa, Yasin Hagi Mahamoud, foreign minister of Somaliland, penned an open appeal to the international community in March in which he stressed the need for African nations to stand up to China and not grant it fishing licenses. “Somaliland’s small fishing fleet cannot compete with Chinese vessels and the advanced technology that they employ,” Mahamoud wrote.

Both licensed and illegal foreign fishing have led to rising anger among local fishermen who have been edged out of their own waters. Somalia, which licenses the foreign fishing boats about which Somaliland has raised issues, insists the foreign trawlers stay at least 24 miles off the coast. Many of the Somali pirates so feared by international vessels began as vigilantes defending their fishing grounds from foreigners after the collapse of that country’s Siad Barre government in 1991.

Not all foreign fishing off Africa is done by China, but according to the U.K.-based Oceanmind, which tracks fishing globally, three-quarters of the ships off West Africa are registered to Chinese companies. To be detected by satellite, a vessel must have an electronic signal that allows ships to avoid collisions with one another switched on. Fishing ships engaged in illegal fishing are unlikely to use such a signal, so Oceanmind’s tracking surely underreports illicit fishing.

Predatory foreign fishing off Africa’s Indian Ocean coast has received less media attention than the Atlantic coast, but the impact is no less and possibly more disastrous. Mozambique imports food from South Africa in part because its domestic markets are denied the benefit of its own, rich fishing grounds.

Ironically, several of the tuna-fishing boats commissioned by Mozambique to develop its own commercial fleet are now being leased by a Chinese-owned company. Unlike Sierra Leone’s one patrol boat, Mozambique, despite well-intentioned efforts nine years ago, still has none. With 1,400 miles of coastline – as long as the United States’ Eastern seaboard – Mozambique should stop renting one of its greatest assets to a faraway nation for pennies on the dollar and undertake a serious effort to teach its under-employed population to tap into the offshore tuna stocks and provide them the tools to do so.