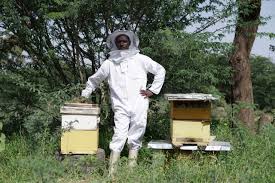 Hassan Muhumed Abdillahi waves from the small green tuk-tuk that has brought him from home to his beloved and ever-growing apiary. Having expanded his business from two hives in 2013 to 150 today, the beekeeper has good reason to smile. His friends describe him as “born with a bee” — a local saying for someone who is very knowledgeable and passionate about something.

Originally from the Gabiley district in Somaliland, Hassan started his journey into beekeeping at the age of 24. His breakthrough came in 2014 when he attended a beekeeping training conducted by FAO under a project funded by the United Kingdom through the Sustainable Employment and Economic Development (SEED) Programme. “That changed my life,” said Hassan. “After the training, they provided us with two modern hives and a complete beekeeping start-up kit, with a beekeeping suit, smokers, knives, and brushes.”

The results have been dramatic. He now produces over 2 000 kilograms of honey each year, up from the 30 kilograms he produced in 2013. Importantly, although recurrent droughts in the area can disrupt his activities, Hassan can also sufficiently maintain his bees’ production. 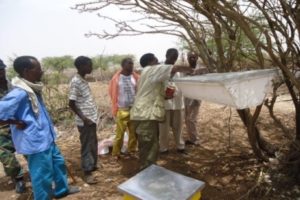 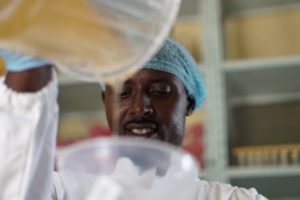 Through trainings for farmers and young people, Hassan demonstrates that beekeeping can be profitable and provide a sustainable livelihood. Left: ©FAO/Erastus Mbugua. Right: ©FAO/Alberto Trillo Barca.

Beekeeping has been traditionally looked down upon in Somali, mostly due to the lack of knowledge in the context of a strong nomadic, livestock culture. 60 percent of the population relies directly or indirectly on livestock activities. However, most people are unaware that beekeeping and processing hive products can be just as lucrative. “People perceive beekeeping as an unprofitable business,” said Hassan. “I know as a matter of fact that beekeeping is profitable.” From honey alone, Hassan’s annual production is equivalent to selling 530 goats at an average market price.

Hassan’s success has allowed him to hire three employees. Two young men work with him at the apiary and one young woman is in charge of marketing. “Women play an important role in beekeeping, especially for business development and marketing,” explains Hassan. Indeed, women make up 30 percent of the beneficiaries of FAO’s beekeeping training.

In addition to keeping bees, Hassan now also delivers trainings to pass on his wealth of knowledge. So far, he has trained more than 200 young people interested in learning how to make a profit from beekeeping.

He also encourages farmers and livestock owners to take up beekeeping to improve crop pollination, leading to higher yields, or as a way to diversify and increase household income. This is particularly key in an area severely affected by extreme weather events, such as droughts and flash floods. With a relatively small investment in labor and resources, beekeeping is an activity that can generate income within a few months.

Hassan has continued to increase his own knowledge as well. Since receiving his initial training back in 2014, he has turned to the Internet to find ways to grow his business. He surfs the web almost every day in pursuit of innovation. “Many of the tools that I have and use at the moment, I found and learned about on the Internet,” he said. “Initially making beehives was difficult for us, but I am currently constructing all the hives for my apiary.” He is also selling the hives he makes to other beekeepers. 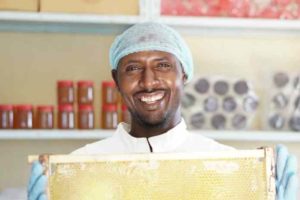 There are still many challenges for Hassan. Notably, meeting market standards and properly labeling and packaging products will be necessary to fully tap into local and regional markets. Nevertheless, Hassan is proud of his honey, which he sells throughout Somaliland and even abroad.

Beekeeping can help alleviate poverty, protect biodiversity and support food security, thus helping to achieve #ZeroHunger. In popularizing beekeeping, Hassan is contributing to FAO’s larger mission of helping countries achieve the Sustainable Development Goals. While these far-reaching benefits may not be visible to Hassan, he is very happy with what he has achieved so far. Hoping to one day “produce enough honey for all Somaliland,” he has his eyes set on a prosperous future.