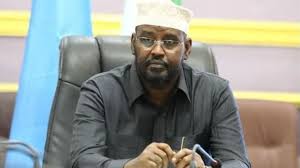 Jubbaland State President and a delegation of senior government officers have embarked on an unprecedented trip to Nairobi, Kenya.

Ahmed Madobe and his delegation were seen off at Sayyid Abdulle Hassan airport in Kismayu by some of his Cabinet ministers, military officials and other members of Jubbaland state government.

Sources say President Ahmed Madobe’s visit to Kenya, is primarily to find solution to the ongoing conflict in the Gedo region, which borders Kenya’s border town of Mandera.

Ahmed Islam Madobe is scheduled to meet head’s of intelligence, military and Kenyan government officials according to sources.

The president of Jubbaland and his delegation took a private jet from Kismayo, which has again violated the Federal Government’s directive, that flights to Kismayo and those coming from Nairobi must transit at Mogadishu’s Adan Ade international airport.

Madobe’s Sunday departure is his first trip to Nairobi since he was re-elected as president of the Jubbaland state in September.

President of the Federal government of Somalia, Mohamed Abdullahi Farmajo, rejected Madobe’s victory in September 2019, accusing Kenya of forcefully imposing him on the people of Jubaland.