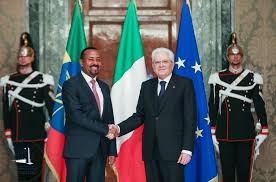 Italy is to fund a feasibility study for a 736km railway line between Addis Ababa and the Red Sea port of Massawa in Eritrea. The agreement was made during a visit to Rome by Ethiopian prime minister Abiy Ahmed.

Mr Abiy, who has been on a European tour, commented: “We are excited and accept with great honour Italy’s support for our plan to link Addis Ababa with Massawa via railway.”

The route, which would pass through Mekelle, capital of the northern Tigray region, then through to Awash to the Red Sea, would be one of the dividends from the peace agreement between Ethiopia and Eritrea which Abiy agreed in July last year.

The treaty led to immediate plans to reconstruct two roads between the countries, and the development of two ports in Eritrea. At present Ethiopia is relies on a single rail line to Djibouti for access to the sea, which would be a source of strategic risk as the economy becomes increasingly involved in global markets.

Prime Minister Abiy’s tour involved meetings with the Pope, Bill Gates, Jack Ma as well as European Commission President Jean-Claude Juncker, as well as a speech as the World Economic Forum in Davos.

Italy, which is the former colonial power in Ethiopia, is involved in building the Grand Renaissance Dam on the Blue Nile through Salini Impregilo contractor.