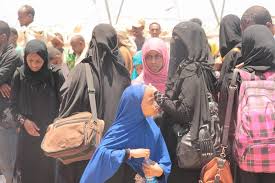 Yemen – IOM, the UN Migration Agency, continues to help migrants, including refugees, stranded in Yemen return home, with its latest voluntary humanitarian return support taking place this week (04-05/08). One movement left from Hudaydah with 132 Ethiopian migrants and the second from Aden with 116 Somali refugees.

For three years, the conflict in Yemen has been taking a toll on both Yemenis and migrants. For migrants, the escalation of violence in Hudaydah in June meant being stranded in Yemen longer than they wanted as IOM’s Voluntary Humanitarian Return (VHR) programming was temporarily stopped from the city’s port. However, improvement in the security situation allowed movements from Hudaydah to resume in mid-July.

IOM transported the 132 Ethiopian migrants – 96 men, 19 women and 17 unaccompanied children, of which 10 were boys and seven girls – by bus from Sana’a to Hudaydah city, where they spent the night in a secure location. The next day (04/08), IOM brought the migrants to the port from which they left to voluntarily return home to Ethiopia via Djibouti.

Nearly 100,000 Yemenis have been displaced by the ongoing instability in Hudaydah. To support the displaced community, IOM is providing food to 500 people a day and medical assistance to 200 people a day.

“Despite the difficult environment in Hudaydah, IOM has been assisting migrants and the internally displaced population,” said Sarat Dash, IOM Chief of Mission in Yemen. “IOM is distributing food and water and providing medical assistance. Meals are being provided at IOM’s Migrants Response Point and in four schools in Al Marawa. We are also providing food baskets and materials to build shelters to displaced people not lucky enough to be hosted in a school,” said Dash.

The day after the Ethiopian movement (05/08), IOM in coordination with UNHCR, the UN Refugee Agency, helped 116 Somalis refugees depart from Aden to return home. The group comprised 48 men, 29 women, 19 boys and 20 girls. This group was assisted through the Assisted Spontaneous Return programme (ASR) for Somali refugees in Yemen, which is carried out in close collaboration with the Yemeni Authority, Somali National Commission for Refugees and Internally Displaced Persons (NCRI) and the Somali Consulate.

So far in 2018, IOM has helped 615 stranded migrants return home from Yemen on IOM’s voluntary humanitarian return (VHR) programme, and 1,321 refugees out of Aden were helped under the Assisted Spontaneous Return (ASR) programme.