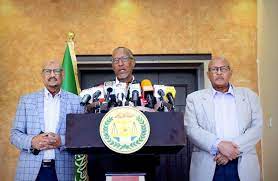 Somaliland’s international partners on Monday urged Somaliland’s political leaders to begin talks on a join election road map that could reflect internal diversity, weeks after tensions emerged over a decision taken by the President.

Last week, a European Union delegation paid a visit to Somaliland and held separate meetings with top government officials, parliament and opposition parties on efforts to hold upcoming presidential vote on its due date and easing tensions over an announcement by President Muse Bihi that had authorized the registration of new political associations.

“It is important that preparations, led by the National Electoral Commission, on voter registration start now so that they can be completed prior to upcoming election dates,” Somaliland’s international partners, including UK, Denmark, Finland and Germany said in a statement.

“As long-term partners in Somaliland’s democratization process we are looking forward to continuing our support and engagement during these next important milestones.”