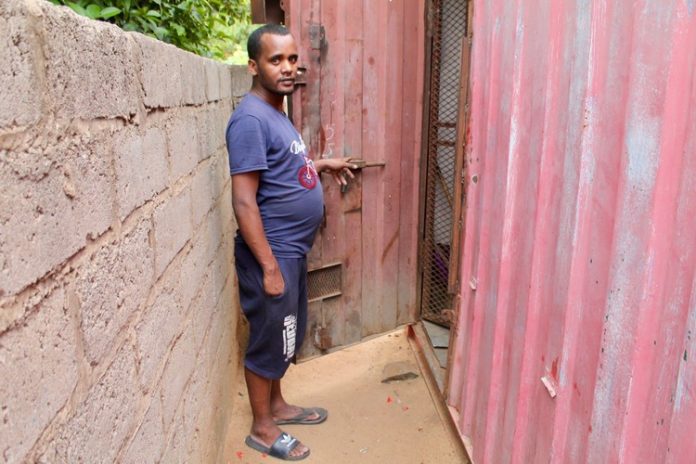 James Melesa is one of dozens of immigrant shopkeepers from Ethiopia, Somalia, Bangladesh and Pakistan who are living in fear in Osizweni township, Newcastle. A spate of violent robbery attacks on immigrant-owned shops has claimed the lives of two Bangladeshi businessmen in the past week.

Mosharaf Hosain, 33, and Limor Mir, 25, who worked as partners in a rented store in Osizweni Section C, were stabbed to death during a robbery in the early hours of Thursday 25 October.

“We are foreign businessmen in a foreign country, and we are all now living in fear because we don’t know what will happen next,” said Melesa. “We don’t know when the attacks will stop, but we have no choice but to keep the business running, because this is our livelihood and our only source of income.”

Police have arrested two men, aged 25 and 28, for the murders. A 61-year-old woman — a landlady of a rented store — was arrested for defeating the ends of justice. She was found by the police washing blood-stained clothes belonging to the alleged murder suspects.

Money, stolen cigarette boxes, and airtime vouchers to the total value of R9,200, as well as blood-stained knives were found in the possession of one of the suspects, according to Osizweni police spokesperson Captain Sipho Nkosi.

The suspects will appear at Madadeni Regional Court on 2 November.

Melesa, 26, hails from Hosaena, Ethiopia. He has lived in Newcastle for almost three years. He arrived in South Africa with his elder brother, Aragaw, in 2016. Aragaw runs a shop in Johannesburg.

Melesa, who co-owns a container-housed shop in Osizweni Section C, said, “There have been many attacks targeted at us the foreign shop owners in this township, and this year it has even been worse. I’m also one of those shop owners who have been at the mercy of violent robbers in recent months as I was attacked in September. About three robbers used crowbars to force my shop’s door open in the early hours at about 3am.

“I was awakened by a loud bang on the door and I quickly realised that the robbers had arrived. In just about two minutes the door had been forced open and the robbers were upon me, and I pleaded for mercy as they demanded money, cigarettes and airtime.

“I was very frightened that they would kill me as they were carrying crowbars and knives, so at that moment I was pleading for my dear life, as they were helping themselves to the valuables. Just after they had just left, that’s when I screamed for help and the neighbours came out for help, though the robbers had already fled the scene,” said Melesa.

Some shops run by Bangladeshi and Pakistani businessmen have closed down in recent months due to the constant robberies.