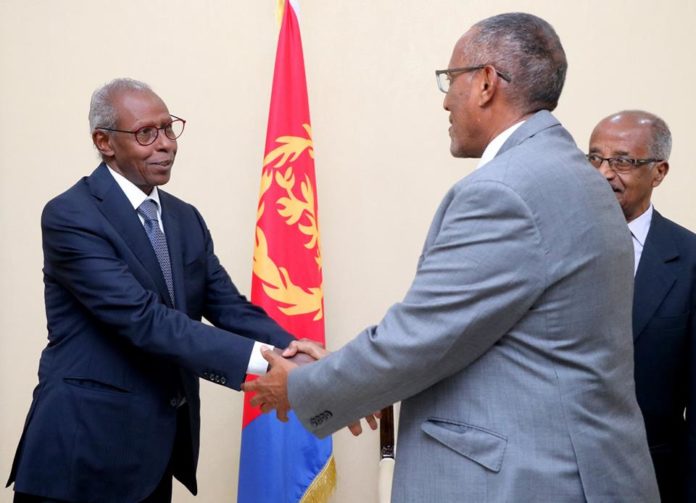 Hargeisa(SOLNA)- A historical maiden trip to Somaliland has been made by re-known Eritrean veteran foreign minister Hon. Osman Salah Mohammed and the Eritrea President’s personal confidant Yemane Gebreab in a ground breaking visit.

The Eritrean delegation which was one precisely sent by non  other than President Isaias Afeworki himself noted that this visit was one focused on orientating themselves with Somaliland.

The duo immediately held talks for several hours in their visit to the Head of State H.E. President Musa Bihi Abdi upon their arrival today 18th March 2019.

the visitors were received by Somaliland VP HE Abdirahman Abdilahi Ismael at Egal International Airport.

While speaking to members of the press at the Presidency the Eritrean FM and his counterpart Hon. Yasin Mohamud Hiir acknowledged the importance of the maiden visit paid by Eritrea.

FM Osman disclosed that his meeting with the President Bihi was quite a fruitful one whereby they were given an in-depth of the social, economical and political situation on the ground of the nation.

Saying that the knowledge they received was one that they would definitely update their president with, he however lamented that the past two decades his country was in political doldrums that impeded them in reaching here since, according to his words, “….we were still warding off subjugations…..”.

His country was generally cut-off mainstream world politics and eco-socio-politics across the region and world at large since the UN had slapped sanctions over Eritrea. They also had fought bitter wars with Ethiopia.

He said that peace has now prevailed and that they are to play their part in the Horn of Africa setting.

It is worthwhile to note that  apart from the immediate Somaliland neighbors the Eritrea FM is the third cabinet minister of a foreign country to visit here after then-Energy minister Raila Odinga of Kenya and British Defence Minister Gavin Williamson of the UK.

Similarly, of importance to note is the fact that the Eritrean administration had called for the express international recognition of Somaliland severally while terming it as legally justified.

Osman Saleh Mohammed was the first Minister of Education for Eritrea following Independence, serving in that position from 1993 to 2007. He has overseen the transition from the revolutionary EPLF school system to a national education system. Osman Saleh Mohammed was also responsible for the Ministry of Education’s relocation of all 12th grades in the country to the Warsay Yika’alo School at Sawa.  In April 2007, he was moved to head the Ministry of Foreign Affairs.

Yemane Gebreab (born 1954 in Keren, Eritrea) is the Head of Political Affairs and Presidential Adviser.[1] He is also a member of the People’s Front for Democracy and Justice (PFDJ), the sole and ruling political party of Eritrea.