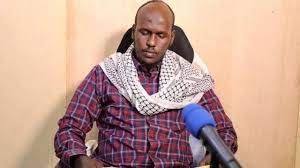 On Thursday, Hargeisa provincial court has officially exonerated Abdimalik Muse Oldon, a local practicing journalist and humanitarian activist of any wrongdoing after the prosecutors failed to bring an iota of evidence of charges against him. Oldon was detained last August in Buroa on charges of posting accusations against Abaarso school and Barwaqo University of spreading Christianity. The court has ordered the police officers to release him from police custody. Al though reports indicate that he still remains behind bars after the prosecuting attorney appealed the court’s ruling. There is a conflicting report that indicate that the regional court has declared that Oldon is a free man who regained his freedom but the prosecutors vowed to appeal against the court’s ruling.