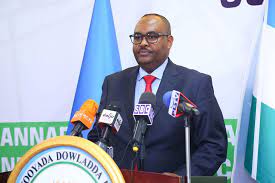 But even with the rumors and speculations, the people of Mogadishu and the Central Regions of Somalia feel strong unease or dissatisfaction with the presidency of Saeed Abdullahi Deni and that lack of acceptance or rejection could be hurdle to derail his presidential ambition. There are Plausible reasons of why people feel unease about Saeed Deni’s presidency. If non-Hawiye president is elected to replace the former president of Somalia, Mohamed Abdullahi Farmajo, or even Farmajo returns to office, Hawiye people, who inhabit mainly in Mogadishu and the Central Regions of Somalia, may go up in arms to block him from taking office for the following reasons:

(I) Since the devastating Somali Civil Wars of 1991, Somalia have not had yet true national reconciliation process held for the tribes for national amnesty and forgiveness and, for that reason, many Hawiye people regretted electing Mohamed Abdullahi Farmajo president because most of the human rights abuses and crimes he committed while he was in the office targeted Hawiye Clan, and he would do much bigger damage unless challenged by local formidable military force. That is why Hawiye People showing hostile attitude or antagonism to the election of Saeed Abdullahi Deni for belonging to the same clan of Mohamed Abdullahi Farmajo, which is Darod Clan. The element of trust is still missing in Somalia and the human rights abuses committed by Farmajo made that untrustworthiness much worse. That is why Hawiye people do not trust to have two consecutive Darod Administrations.

(II) Many Somalis believe that presidents from Darod Clan are usually inclined toward dictatorship which is solely responsible for the repeated civil wars, failure of governance and failed state status in Somalia. People still remember that late Dictator, General Siad Barre, who had been ruling the then Republic of Somalia for 21 years (1969-1990) finally lead the country to catastrophic civil wars. Dictator Siad Barre committed genocide, immense destructions and displacements that haunt people still today and that resulted in the breakup of the former Republic of Somalia into Somalia and Somaliland. General Siad Barre was ousted from power by armed fronts in the beginning of 1991 and fled to Nigeria where he later died.

(III) People also remember Colonel Abdullahi Yussuf Ahmed who when elected president of Somalia in 2004 gave authorization to the Ethiopian government to invade Mogadishu with Ethiopian military in 2007 committing atrocities and destructions against Hawiye people for revenge of 1991 civil wars when Siad Barre was ousted and Darod clan dictatorship lost power of the country. Abdullahi Yussuf prepared himself to become a dictator of Somalia but Hawiye and international community denied him of continuing the brutal dictatorship and forced him to resign in 2008. Dictatorship is not only defined by the length of time but also by brutalities.

(IV) Mohamed Abdullahi Farmajo was elected to the presidency of Somalia in 2017. Immediately after he came to power, he created police state in Somalia forming tribal force and police units like Duufaan Brigade to weaken the already existing national army and police force in order to subdue people for tribal dictatorship giving chance to Shabaab comeback. During his reign, he forcibly changed the regional administration presidents of South West and of Galgudud using Ethiopian troops killing many civilians to instate two pro-Farmajo presidents. Farmajo’s secret agency known as NISA headed by Fahad Yaseen was blamed for the assassinations and disappearances of prominent personalities and government officials to eliminate opponents and dissidents. He is also accused of secretly sending around 10, 000 young Somali troops to the deadly conflict in Tigray Region in Ethiopia without parliamentary approval committing atrocities against civilian population of Tigray people siding with Abi Ahmed and Isaias Afwerki in that deadly conflict. https://www.theglobeandmail.com/world/article-somali-troops-committed-atrocities-in-tigray-as-new-alliance-emerged/. Many of the young Somali troops are presumed or believed to be killed or wounded in Tigray Region.

Farmajo is also accused of narrowly killing former presidents and other opposition party leaders of Somalia on April 19, 2021 etc. He is also allegedly signed secret agreement to grant seaports of Somalia and Somaliland to the existential archenemy of Somalis in the Horn of Africa, Ethiopia, in order to become life-long tribal dictator in Somalia which, if becomes true, is a major treason. Former president of Somalia, Mohammed Abdullahi Farmajo, has also been blocking and disrupting presidential election process of Somalia for almost two years for the sake of dictatorship. The presidential term of Farmajo expired on February 8, 2021 and he still clings to power without legal mandate clearly indicating his inclination toward dictatorship. He almost ignited civil war in Mogadishu on April 25, 2021 when he tried to have illegal two-year presidential term extension but Mogadishu National Salvation Army foiled it.

Mohamed Abdullahi Farmajo spends almost all the public funds of the country from Mogadishu taxation, from Donors and from businesses and foreign project investments for personal and for kinsmen enrichment and for personal promotion to be praised for patriotism and for progress that he does not have or make at all. Much public funds go to Social Media Insects (SMI) or Cayayaanka Baraha Bulshada as they call it in Somali language(CBB) especially those on Facebook, and to bribing some of the regional and government officials, traditional leaders and former politicians to support his dictatorship and for corrupting presidential election to have favourable outcome. Little money or no money at all is spent on improving roads, sewage system installations, sanitation, water system, schools, medical clinics, public markets, public transportation etc in Mogadishu.

Abiy Ahmed, Isaias Afwerki and Mohamed Abdullahi Farmajo secretly founded in the middle of 2018 in Bahardar, the capital of Amhara, what was called “Horn of Africa Military Alliance” to create triangular dictatorships in the Horn of Africa under the false, deceptive idea of “Horn of Africa Integration,” with the help and mentoring of dictatorship spiritual leader, Afwerki, and under the guidance of an Eastern Power. The mission of the military Alliance was to destroy together any rebellion in those three countries against their dictatorships and that is why they destroyed Tigray Region and Tigray people together. Reliable Western sources mentioned that Somaliland and Puntland, Mogadishu and Kismayo of Somalia could have been the next targets. Another exclusive secret mission of the military Alliance for Abiy Ahmed of Ethiopia was to seize Somaliland and Somalia seaports for land-locked Ethiopia. This criminal military adventure failed when the Tri-Evil-Axis of the Horn of Africa were defeated in Tigray Region and the Western Powers crippled their criminal conspiracy with devastating economic and military sanctions levelled against them. Could former president of Somalia, Mohamed Abdullahi Farmajo, with such appalling record return to power and what would be the human cost of his return?

(V) General Siad Barre, Colonel Abdullahi Yussuf and Mohamed Abdullahi Farmajo who are blamed for brutal dictatorships in Somalia all belong to the same clan “Darod” and that is why Mogadishu People do not trust Saeed Abdullahi Deni, the president of Puntland Administration. Since independence of 1960, Somalia is in political turmoil, crises and civil wars that generate massacres, revenge, destructions, displacements, fleeing refugees and suffering, people never had relief from fear, worries and poverty, never has there been constant peaceful progress, future of generations has been wasted and the UN and international community are fed up and tired of helping Somalia because of the devastations and hopelessness caused by tribal dictators.

Tribal dictatorship in Somalia is a destructive phenomenon that needs to be debated in forums to get solutions for eliminating it for being a major cause of catastrophic civil wars and socio-economic setbacks. Without reactionary tribal dictatorships, the then Republic of Somalia would be prosperous and powerful country in the Horn of Africa with appreciated continental roles, and Djibouti would have jointed it right away.

(VI) President Saeed Abdullahi Deni of Puntland is already having ongoing armed conflict in his own region and failed to solve it. Some Puntland Administration former officials accuse him of corrupting the electoral process in Puntland to get as many delegates as possible to win the president of Somalia, and that could question his personal integrity and ability of problem solving in the highest office in Somalia.

Another important issue that could come up if Saeed Deni elected president of Somalia is the false claim of Puntland consecutive Administrations of Sool Region and Eastern Sanag which are integral part of Somaliland territory within the Biritish Somaliland Protectorate borders on which Somaliland achieved independence and recognition on June 26, 1960. Puntland Administrations claim this Somaliland Region for clan lineage or tribal affiliation only. The territory of every African country is defined by its colonial borders, not by tribal lineage, and that is why Sool and E. Sanag are integral part of Somaliland Republic. If OAU does not recognize Somaliland for its colonial borders like any other African country, then OAU conference in 1964 for reaffirming and respecting African colonial borders will be obsolete and internal tribal conflicts will dismantle African colonial borders and end the existence of the African continent. If Saeed Deni succeeds in the presidential election of Somalia, he could become a cause of a major war between Somaliland and Somalia just to pursue his mad tribal ambitions that could create further tensions between Somalia and Somaliland and that could lead to massacres, displacements and destructions in the Horn of Africa again.