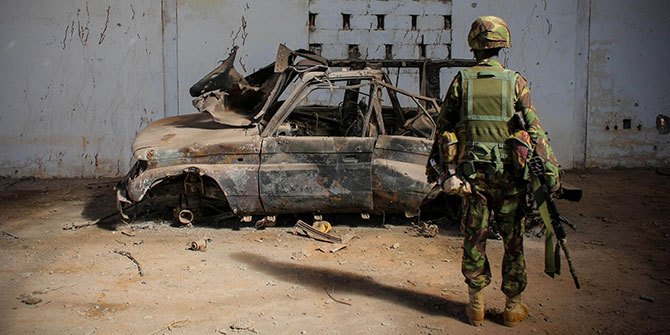 As the countdown to the withdrawal of the Africa Union’s peacekeeping force in Somalia continues, Bryan Mutiso analyses the country’s prospects. 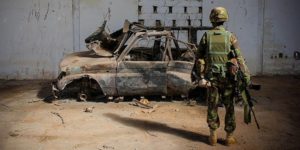 Somalia is an interesting place to try and understand the morphing, and increasingly complex nature of war – from the multiple actors, both state and non-state, to the frighteningly close horrors that filter through on our ever-pervasive digital screens. Young men and women across the region, and from as far away as Minnesota, in the United States, have fallen victim to the allure of fighting a ‘just cause’, and as a result, countless families — even those who send their children off to war to fight such victims — have themselves been victimised. Yet, many parties have stood to gain, be it monetarily, or by their new-found prestige and strategic alignment with superior allies.

But as the conflict in Somalia wanes or intensifies (depending on whom you ask), a mounting and unavoidable danger lurks.

On 1 July 2018, celebrations were held in Somalia and across the diaspora, marking the 58th anniversary of the country’s independence. Two years from now, as the country marks its diamond jubilee, the full withdrawal of AMISOM from Somalia is scheduled to take place. Coincidentally, this will also happen to be the year by which the AU Master Roadmap (AUMR) on Practical Steps to Silence the Guns in Africa by the Year 2020 is expected to be implemented.

A Kenyan soldier examines the wreckage from an IED explosion in Somalia
Image credit: AMISOM

Currently, at the international level, it is an open secret that there is growing disaster fatigue regarding Somalia, among other regions on the precipice (humanitarian efforts are up, but historically low; political efforts lack global leadership). In Somalia’s case, the overarching problem — perhaps dating back to 1967/9 – has been the general lack of legitimacy of the ruling elite.

Further, it will not be lost on observers that the fast-approaching elections also scheduled for 2020, and where the, as yet, unfulfilled promise of ‘one-person-one-vote’ is marked for delivery, presents a unique turning-point for the war-torn country. Should the ballot be once again confined to a select few, al Shabaab and company will only be further vindicated in their claims to authority, no matter how narrowly defined these may be.

All the same, should inclusivity be stressed, the existing array of political agendas might threaten to burst an already fragile context into further anarchy. Indeed, 2020 might present the country with its most difficult balancing act in decades, and it will be the hurdle that really tests the patience and/or true resolve to actually alleviate the situation, on the part of local and external actors.

One emerging, and stinging critique of the African Peace and Security Architecture (APSA), is that it is a 21st century tool of rentierism mirroring the Cold War neopatrimonialism that shaped much of Africa’s recent destiny. One wonders about the veracity of the proclamations of help coming from outside, as with the intentions of local players, in their ‘shared goal’ to stabilise Somalia, as when the long-requested heavy machinery arrive 24 months to the date of withdrawal, in the first case, or when internal power strugglesdominate over more pressing recovery efforts, in the latter.

In January, the Office of the President of Somalia announced that the State of Galmudug would also be working closely with the “moderate Suffi group” Al Sunnah w’al Jama’a (ASWJ) — not a total surprise, seeing that as far back as 2009, religious groups had been partners with the now defunct Transitional Federal Government (TFG) of Somalia, and quite perplexingly, with the full support of Ethiopia, who had reportedly invaded due to militant, Islamist rhetoric. Kenya, too, has not shied away from the use of shadowy militias in the securing of her own interests; in Jubaland, just across Kenya’s border with Somalia, at least one militia organisation has been given the green light, in recent years, to counter any other threats that may pose a risk to Kenya. The Federal Government of Somalia, however, is taking this logic a notch higher by agreeing to integrate ASWJ, their ‘moderate’ stance not withholding, in its armed forces. What this portends for future political settlement(s) in the country will not be to the liking of all parties.

A case in point is the United States’ indirect starvation of millions of Somalis, when it fiercely stuck to Article 4 of the USA PATRIOT Act, automatically cutting off aid to most agencies operating in Somalia, in 2011, at the height of the region’s worst drought. The mere suspicion that some food assistance would land in the hands of terrorists fomented a policy of what was, in effect, mass starvation, as Alex de Waal and others elaborate. As non-governmental actors and popularly elected governments have discovered, in accepting Islamists, you are damned if you do, and damned if you don’t.

It is hoped that the needed military build-up in Somalia, will not just be another “castle in the sand”, a nuanced critique of pre-civil war Somalia’s military architecture, given by Ken Menkhaus
Image Credit: AMISOM

Somewhat positively, external actors now acknowledge that Islamist parties may have “migrated from their absolutist roots”. UK’s DFID has traditionally called for “inclusive” political settlements. Closer to home, the African Union’s Livingstone Formula – although hardly utilised — outlines the steps for engaging civil society in reconstruction and peace-building. The Eastern African Intergovernmental Authority on Development (IGAD) similarly adopted such inclusive ideals at a policy level, at least. The problem, as many point out, is that the Islamists are armed. But then again, who isn’t in Somalia?

The irony, then, in going full-circle to negotiate with non-violent Islamists, is that the hawks would be owning up to the futility of the war. Should such pragmatism prove politically untenable, then Somalia will be kept in perpetuity like Afghanistan, as described by one Pakistani official — “the boiling pot that does not boil over.”

To be specific, one recent report by the Counter Terrorism Centre at West Point found that a defeated al Shabaab could “theoretically strengthen [Islamic State in Somalia] in the relative shadows”. One should not be surprised, therefore, if the former entity becomes the new strange bedfellow in the ‘war on terror’, as the murderous, rag-tag clan militias became US allies in the fight to root out the Islamic Court’s Union.

Bryan Mutiso is a recent graduate of the MSc Conflict Studies program at the LSE. He has focused on issues surrounding the Somali conflict for the past several years, and most recently contributed to the joint Development Responses to Displacement Impact Project (DRDIP Phase II) for IGAD and the World Bank, as part of an external consulting team.