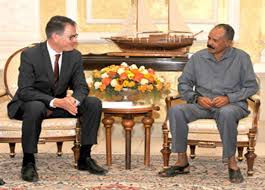 ADDIS ABABA, Ethiopia  – A decline in migrants from Eritrea is expected after the country and Ethiopia have made peace, Germany’s development minister said Friday after visiting the long-reclusive country.

Eritrea has been a major source of migrants fleeing toward Europe and elsewhere, but a dramatic diplomatic thaw in recent months with Ethiopia and its new prime minister has brought fresh attention from the international community.

Germany currently has about 75,000 asylum-seekers from Eritrea and some 15,000 young Eritreans have sought asylum “in the course of this year” alone, Mueller said.

The minister said he hoped Eritrea’s system of years-long military conscription, long criticized by human rights groups, will be reduced and that the country will move toward “democratic structures” so people no longer will feel the need to leave.

Eritrea’s people are now “full of hope,” he said.

Following on Abiy’s moves to open up state-owned companies to outside investment in one of Africa’s fastest-growing economies, the German minister said Deutsche Telekom should step in and make an offer.