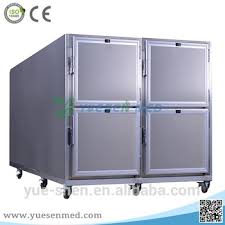 The mortuary fridge can accommodate 4 corpses at a time.

Gebiley hospital has been lacking its own mortuary since its inception and has been relying on Hargeisa General Hospital.

The mayor of Gebiley, Mohamed Amin Omar ABdi had received the donation from Sheikh Farah, who had handed over the modern fridge on behalf of Kuwaiti business tycoon, Faris Fallah Al Bathman.

Speaking at the handing over ceremony, the mayor, Mohamed, had said that the Kuwaiti tycoon is a close friend of Somaliland and had donated mortuary fridges to Hargeisa and Wajale hospitals.

Staffers at the hospital were urged to exploit from the use of the mortuary facility and at the same time preserve it.

Sheikh Farah had handed over the keys to the Gebiley regional governor.

In addition, Gebiley local government had laid the foundation stones of blood bank, the mortuary premise and duty room that staffers operating at night shift could use.