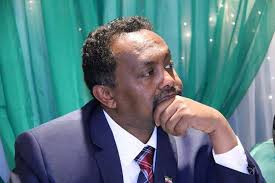 September 17, 1989, I left Mogadishu by taking Somali Airlines flight to Frankfurt, Germany. One month earlier, in the middle of August 1989, I’d woken before dawn to be able to get to the United States Embassy in Mogadishu. When I arrived there at five in the morning, the line was already long with people who had slept all night in front of the Embassy building.

Hundreds of us waited that day to submit a visa application and be called for an interview, but we knew that only a certain number of us would be granted a visa. A lot depended on how the interview went. The sun was sweltering hot that morning, but I did not mind. In front of me was a woman who wanted to go to her son’s wedding in Atlanta. Behind me was a couple whose child had rare disease that could be treated only at Memorial Sloan Kettering. Yes, every one of us had a story. “I am going to Boston,” I told everyone.

It was two in the afternoon before it was my turn to be interviewed. By good fortune, my interviewing officer had attended Boston College. I told him my plans and my reasons for going and finally he said, “You will love it there.” He flashed me a conspiratorial grin, and then I knew. I wanted to throw my arms around that man’s shoulders since I was so happy, but there were hard glasses that did not permit me to do that. I ran to tell everyone in my family particularly Uncle Ahmed Esse who was my room-mate at the time. It was true; I was really going to America.

I could hardly contain myself in the weeks before I left. I had so many invitations from friends for farewell lunches and dinners during my last month in Somalia that I had no more room in my schedule, and I ended up having to meet people for farewell breakfasts as well.

Civil war was raging in Somalia, and the country was becoming difficult. In the south, in Mogadishu, where I lived then, everyone still went about their lives peacefully enough. Busy as I was with school and work and friends, it was easy to be shielded from the horrific events happening in the North. When Siad Barre first came to power, he made many positive improvements to build up the country.

He set up farms and factories, built roads, health care clinics, schools, and planted trees on a massive scale. I’d grown up in the generation that enjoyed relative peace and prosperity and had benefited from Barre’s education reforms in the 1970s and early 1980s. Things were getting worse in the late eighties. Only later did I find out the extent of the violence. A Somali proverb says: A man caught by a flood clings to the form (Nin daad qaaday xunbo cuskay). The government forces had been indiscriminately shelling towns and cities in the north.

I was going to America. My heart soared. I was just a young-man who was excited. The flight from Mogadishu airport flew over the “Halane training boot-camp,” where people go for three-month intensive military training after graduating from high school, and as a requirement before going college.

Just five years previous, I had been in the camp, and whenever I saw the big planes flying over, I had daydreamed about taking a plane all the way to America.  And now, here I was flying over Africa and to Frankfurt. From Frankfurt, I flew on Lufthansa Flight #422 to Boston. For the better part of twenty-four hours, I sat wide-eyed by the window, taking in clouds, twisting rivers, and masses of land. How small the world seemed and how very large!

After horrifying experience at the Boston Logan airport, Immigration officer told me I was free to leave the airport. Feeling numb and shocked, I finally walked through the customs gate and indeed found Mohamed Ali Baranbaro (my cousin), Abdulhamid Mohamoud Yussuf and Abdurrahman Yussuf (Dhegaweyne) waiting patiently. They told me that the Immigration Inspector had questioned them to check my story.

I thanked them profusely for waiting so many long hours for me and then they insisted I sit in the front seat of their car for my first view of the fascinating United States. It was gray Buick car made by General Motors and owned by Abdurrahman Yussuf.

When we drove through the tunnel, I could not believe that we were driving under water. Coming back to town after a summer spent in the countryside, I used to travel on the top of a big truck made in Japan.

The truck usually had about twenty people and goats, all of us sitting on big sacks of grain, rice, and sugar, shielded from the road by a wooden frame that was like a fence. I could scarcely believe that I was sitting in the front seat of a big American luxury automobile with nice songs on the radio and nothing to do but enjoy the scenes of Boston. The darkness lit up with flashing lights was truly astounding. Unbelievable. Truly unbelievable.

I went to stay at my cousin’s apartment. I became a little nostalgic about Mohamed. He was my cousin from my mom’s side. Mohamed Abdirahman Ali (Baranbaro), I remembered the first time I met him; back when I was twelve years old, and he was nine. My dad had sent me for the summer holidays from Beled-weyne, where I’d lived with him while he was stationed with the military, to Mogadishu, where Aunt Sahra lived.

My Aunt Sahra is Mohamed’s mom. Abdirahman Ali Baranbaro, who was a senior intelligence officer, was also Mohamed’s dad. My dad couldn’t take me to Mogadishu, so instead I was trusted to a gentleman called Mohamoud Saeed, who was at that time working in Mogadishu for the ministry of Transport (and later for the Somali Airlines), who happened to be passing through Beled-weyne. It took Mohamoud Saeed three days to locate my aunt’s house in Mogadishu! There were no yellow pages, no internet, no way to look for my aunt’s house. Telephones were out of the question—they were only installed in few government official’s houses.

It was all a big adventure for me. I rode on the back of Mohamoud Saed’s little motorcycle, a Vespa, as we rode around the city, asking one person, who directed us to another person, and then another in order to find where my aunt and her family were living. Mogadishu was known for its large-screen cinemas and in the evening, he took me to the movies. We saw action films. Mohamoud Saed really took good care of me. After seeing him in Hargeisa recently, I am proud to report that he is now Sultan and chief for his tribe.

This experience of coming to Boston and staying with Mohamed also reminded me of when I had first arrived in Mogadishu as a teen-ager. Mohamed’s dad, Abdirahman, a senior colonel, was in charge of intelligence for the entire northwest region before things collapsed. He was a great man who did not live to see the country’s descent into chaos; in 1981 he died in a Somali Airline plane crash. As a young man, Mohamed had a similar demeanor to his late father. This is just a glimpse of my reminiscences during my departure. Mogadishu was a beautiful city where streets were scrubbed, wiped, and cleansed.

This was a journey of hope and possibility in the face of an arduous and challenging environment. Both sides of the coin — geography and ethnicity — were against me in America. But I did not give up, and in the process, I got lucky. Allah blessed me meeting tremendous people who offered enormous help. What carried me as a young man through the hardships in America and other countries was a deep belief in my own abilities, an attitude instilled in me from a very young age, when I was a nomad responsible for herding sheep and goats for days on end in the northern Somali rural area during school holidays.

Equally important to my adult success was my family’s emphasis on education. They stressed that real wealth is education and habituated me early on to hard work. They expected me to be extremely determined and insisted that I meet the highest standards, regardless of circumstances. Although harsh lessons for a child, I’m convinced that discipline is the key that opened for me a world of opportunities that I’d previously never dreamed.