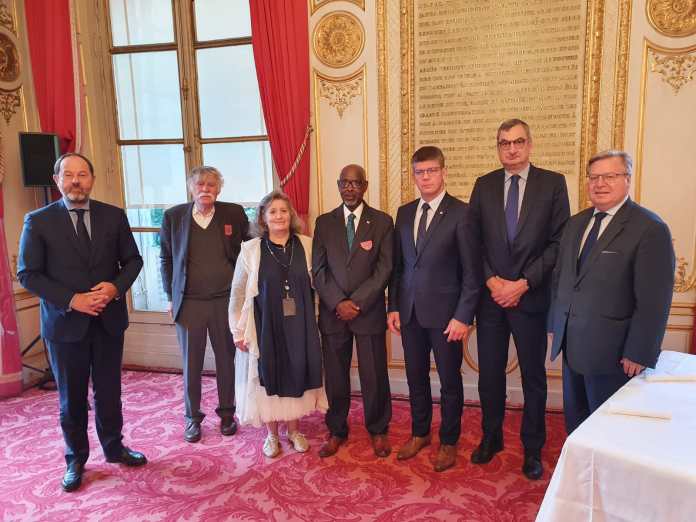 French Senate praises the Somaliland people and government peacefully holding recently ended parliamentary and local elections in the country, and pledges to support for the development of Somaliland.

The representative Republic of Somaliland to France Ambassador H.E. Ali Hassan Ismail who was invited to the House of Elders in Paris met with the members of the Horn of Africa Friendship Committee.

The Ambassador of the Republic of Somaliland to France H.E. Ali Hassan Ismail, who was invited to the French Senate, met with Friends of the Horn of Africa friendship committee on Thursday, September 07, 2021.

Ambassador Ali accompanied by a legal expert and the Chairman of the Friends of  African Parliaments and France (both who voluntarily liaise with the Somaliland office) to the meeting which lasted for an hour hence, in retrospect, discussed about the just held Representative and Local Elections, Horn of Africa general situation and the ways and means France strengthens Somaliland’s development.

Ambassador Ali who briefed the committee on the elections, the situation of COVID, and the general situation in the country, first thanked the people and the government of France for the recent arrival of the COVID 19 vaccine donation, updated its inoculation to the people throughout Somaliland.

In terms of security in Somaliland vis-à-vis the Horn of Africa, he said the government usually adopted a neutral policy; as stated the President of the Republic of Somaliland, and calls for dialogue to end all disputes.

At the end of the meeting, the Horn of Africa Friends of the Upper House accepted an invitation from Ambassador Ali to visit Somaliland. It is expected that he will be holding a further meeting with the group for notification of a precise date for their forthcoming visit.

Meanwhile, Somaliland’s Ambassador to France H.E. Ali was honorably invited to a ceremony marking the 110th anniversary of Taiwan’s National Day in Paris.

A well-organized event, attended by most of the foreign diplomats in France, French MPs and government officials praised Taiwan’s progress in various fields and how they can contribute to global development, if allowed membership of the UN agencies such as the World Health Organization (WHO), the World Trade Organization (WTO) etc.

Officials at the meeting admired Taiwan’s role in easing COVID pandemic and how they helped world nations by supplying abundant free preventive equipment of COVID pandemic.