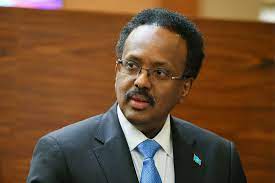 Somalia’s President Mohamed Abdullahi Farmajo has called for a new consultative summit to choose a new Prime Minister to lead the country to timely and credible polls, accusing the incumbent Mohamed Husien Roble of failing to undertake his mandate, ex-interior minister Abdi Farah Saed Juha has described as a new ” political coup”.

In a decree issued on Saturday, Farmajo said Roble failed to undertake his mandate to lead the country through elections as per 17 Sept. 202 agreement and subsequent procedures issued 1st October 2020.

The President would convene ” a consultative meeting involving the leadership at Federal, State and Benadir levels geared towards charting a direction for elections and agreeing on capable leadership to spearhead timely, and transparent elections in the country,” statements add.

Farmajo has extended an invitation to Somali stakeholders “including intellectuals, politicians, and civil society for their inputs and views on electoral concerns to contribute towards coordination of elections in a peaceful and equitable environment.