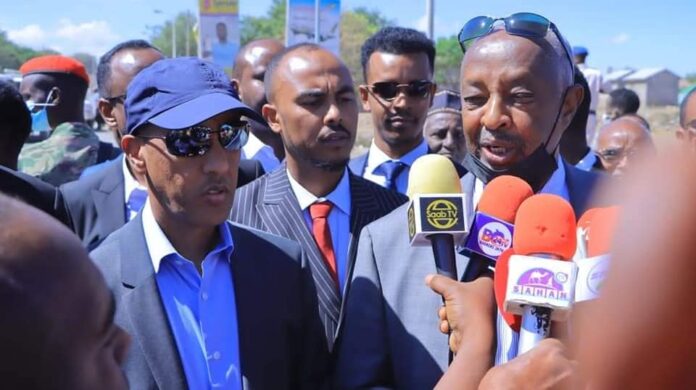 The Somali State of Ethiopia leader Mustafa Mohamed Omer alias ‘Akjar has arrived in Somaliland for a working tour that would mainly focus on the bolstering of the socio-economical and bilateral security relations between Somaliland and Ethiopia.

In a tentative press conference he had at border the town of Togwajale leader Mustafe ‘Akjar noted the precise bilateral relations that needed stepping up for the good of the people of the two countries, noting that a lot of socio-economic and political changes has occurred in the region, thence the state of security, like all other bilateral relations, needed being bolstered.

The leader told the media that he would avail more details upon the completion of consultative meetings with Somaliland leaders.

He was warmly received at the border by the Interior Minister Hon. Mohamed Kahin Ahmed who led a large reception delegate comprising of several senior state officials.

Hon. Kahin reminded the audience that the Somali State leader was arriving in his motherland, underpinning the fact that the peoples of this region were related in blood; social setting, language, culture etc. hence lived side by side.