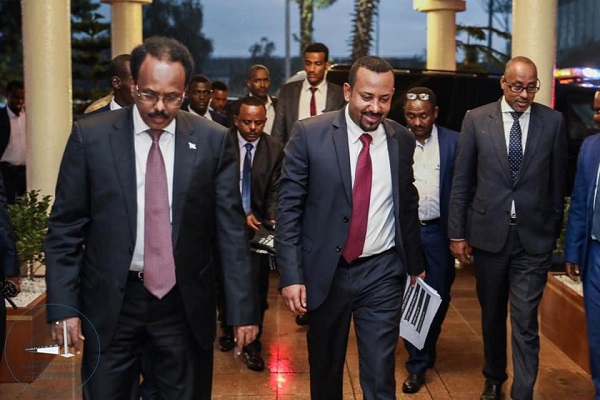 Despite not all seem to go well in Ethiopia; Prime Minister Abiy Ahmed is toiling to forge economic integration in the Horn of Africa region.

After hosting hosting Kenyan President and his entourage, mostly his country’s businessmen interested in attending Business Forum in Ethiopia, Abiy Ahmed flew to Asmara on Sunday along with Uhuru Kenyattta.

The talk, as reported by the office of the prime minister, focused on regional cooperation.

On Monday, Abiy and Eritrean President Isayas Afeworki had to fly together on board of Ethiopian Airlines jet to South Sudan to hold trilateral talks with South Sudanese leader, Salva Kirr.

On Tuesday, Abiy received president of Federal Government of Somali, Mohamed Abdullahi (“Farmajo”), at Bole International Airport. According to updates from Abiy Ahmed’s office, the Somali president came to discuss economic cooperation, peace and security in the region but no further detail was given.

On Tuesday afternoon, Abiy Ahmed and Mohamed Abdullahi (“Farmajo”) traveled to Kenya. Officially stated reason for the trip to Nairobi is that Abiy is brokering, as chairperson of Intergovernmental Authority on Development (IGAD), peace between Kenya and Somalia.

Friction developed between the two East African nations following controversy over resources and disputed territory in the Indian Ocean.

In mid February, Kenya recalled its special envoy to Somalia and expelled Somalian Ambassador to Kenya.

Although what Abiy is doing seen in a positive light as far as maintaining peaceful relations between neighboring countries in east Africa, the ethnic politics that he lives in his own country is raising doubts about his capability to bring about peace in Ethiopia. His ethnic Oromo party in the ruling coalition, ODP, is demonstrating ethnic dictatorship sentiments, in the eyes of many Ethiopians.