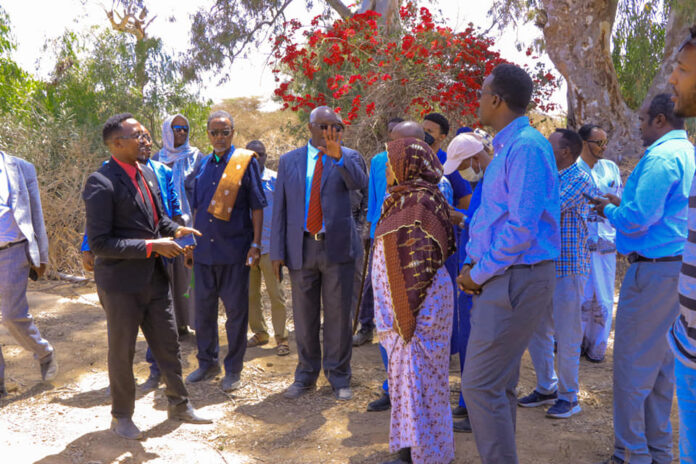 The Provincial administration of Awdal region and ministry of environment regional officials welcomed the minister of environment and natural resources Hon. Shukri Haji Ismael Bandare to Borama town.
The minister was on an inspection visit to the town’s trees nursery project.
Minister Shukri held a meeting with the regional ministry of environment employees. She emphasized the importance of steadfastness by ministry employees in the initiation of development programs and strengthening of public service to Awdal residents.
She, later on, led a strong ministerial delegation on a tour of the environment ministry Trees Nursery Project located on the eastern periphery of Borama town.

A Borama Municipal Council top official informed the minister that they had a closely knit relationship with the ministry of environment and have plans to plant many trees across the town’s environs.
Chancellor of Amoud university, Prof. Suleiman Guled articulated the importance of afforestation in the protection of environmental degradation. He informed the minister of Environment of the severity
of tree cutting in the country. He added the situation has worsened in later years. The University Don informed the need for cooperation between relevant government officials and stakeholders from district to provincial level.

Director General of ministry of environment Mr. Abdikarim Adam Saeed said “Our visit intention is to motivate, encourage and promote afforestation in all regions of the country.”

The environment minister said, “My tour is to encourage a functional trees nursery in Borama. I would like you to put much emphasis on the working of this nursery which has a long history. It was established during the British colonial government and has quite fond memories.”

Minister Shukri affirmed her plan to make this nursery project in Borama a success story. She confirmed her will to see production of vegetables commences at the site.
In a related story, the minister of environment toured Gabiley region to initiate a trees nursery project. The minister was welcomed in Gabiley town by the deputy regional governor Mr.Ali Abdi Abdillahi and
H.E Mayor of Gabiley Municipality.

The environment minister held a meeting with the regional administrators at the governor’s office.
She later went on an inspection tour on the town environs to see the trees planted by the local council.
Mrs.Shukri laid the foundation of a new trees nursery project in the town.