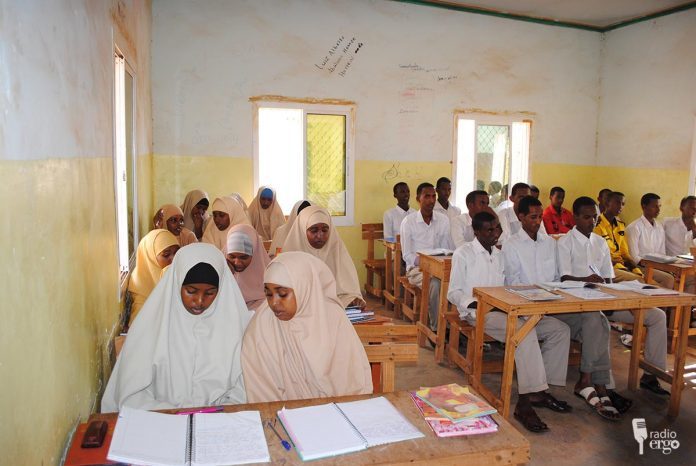 When the brand new school built in Magalo-ad village, six km from the Somaliland port of Berbera, finally opened its doors in September, there were just 36 children occupying the eight-classroom building.

Built by the international charity SOS Children’s Villages and run by the Somaliland government, the school brings educational opportunities for the first time to the children of the nomadic pastoralist community in the area.

The disappointing rate of enrollment at the new school led the authorities to mobilise rapidly to conduct an awareness campaign in collaboration with SOS Children’s Villages.

As water and pasture are scarce, pastoralist parents with hundreds of livestock are constantly on the move. Children normally move with them and are tasked with taking care of the animals and doing other chores.

“Education is important for a village like this one with a large number of children,” said SOS Children’s Village officer, Ayanle Ahmed Mohamed. “SOS constructed this school for the village but parents failed to bring their children at first, so we carried out a three week campaign to create awareness.”

The campaign bore fruit. Eighty two children were enrolled as a result of the community discussions, bringing the current school roll to 118 students.

Adan Mohamed Omar, a village council elder involved in the campaign, said they sat with parents to persuade them to allow their children go to the school.

Nur Farah Igal, the headmaster, commended the campaign for changing the attitude of parents towards education.

“Now people seem to have understood the importance of education because since the launch of the campaign, we started receiving new pupils,” he said.

Ibrahim Digale, Somaliland ministry of education coordinator in Sahil region, said the ministry took over management of the school and will meet the running costs.

“Our plan is to educate two out of every three children in every pastoralist family. We will do everything to ensure the education of these children is not disrupted,” Ibrahim told Radio Ergo.

“Our target is to enroll all school-aged children living in this village so that no child is left behind. In the next five months, we hope the number of the pupils in school will double.”

Amina Mohamud Ismail enrolled four of her children at the school.

“I have taken up the task of looking after the livestock myself and decided to allow the children to go to school, after the elders came to my house and convinced me,” Amina said.

Adan Mohamed Omar transferred his son from a school in Berbera town. “It used to take an hour for the children from this village to get to school in Berbera,” he said. “I decided to transfer my child to this new school and I am happy with how it has turned out.”