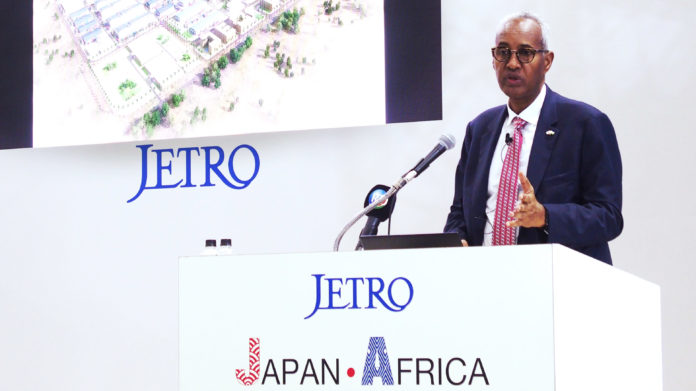 Aboubaker Omar Hadi, chairman of the Djibouti Ports and Free Zones Authority, speaks at the Tokyo International Conference on African Development on Aug. 29 in Yokohama.

TOKYO — Africa’s Djibouti Ports and Free Zones Authority, operator of the strategic East African country’s ports, is seeking $11 billion in investment for upgrades, and new facilities such as airports.

In an interview with Nikkei Asian Review on the sidelines of the Tokyo International Conference on African Development, the port authority’s chairman, Aboubaker Omar Hadi, called for Japanese investment, saying that at this point Djibouti had “no choice” but to rely on Chinese funding.

Djibouti’s infrastructure is increasingly dominated by Chinese money, including a new free trade zone that opened last year and is 40% Chinese owned. Located in the Horn of Africa and connected to neighboring Ethiopia by railway, Djibouti’s port is strategically located for both naval operations and trade between Africa and the rest of the world.

Hadi said Djibouti plans to build more ports and airports worth an estimated $11 billion. Although he declined to say how the capital would be raised, he said the government expects 70% of the funds to come from “foreign direct investments,” with the government covering some of the rest.

He complained that countries other than China had not invested enough in Djibouti. Apart from the free trade zone, China has put money into two of the country’s ports, Hadi said, with Chinese concerns owning 23.5% stakes in each. China is also helping build a railway between Djibouti and Ethiopia.

He rejected concerns that Djibouti could become the next Sri Lanka, which handed the strategic port of Hambantota to China after it ran into debt problems.

“It is not true that China will take over our assets if [we] cannot pay it back,” he said.

Hadi emphasized that Djibouti’s debt level was not too high, saying that the country’s gross public debt was equal to 67% of its gross domestic product, or 40% if the informal sector is included.