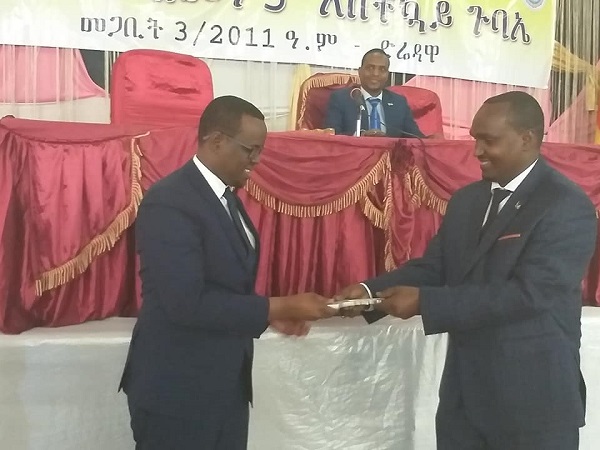 Dire Dawa City Mayor, Ibrahim Usman, tendered resignation on Tuesday. He had been in the position only for the last three years.

The city council called on an emergency meeting to accept the Mayor’s resignation and replace him with Mehadi Giren, according ot a report by Ethiopian Broadcasting Corporation (EBC).

The ethnic Somali party governing Somali region of Ethiopia intends too assign resigned mayor to a different role although it is not disclosed officially.

The report by EBC said Dire Dawa council picked Mehadi Giren in consideration of his “experience and academic qualifications.”

As well, the city council appointed former deputy mayor, Abdella Ahmed, as speaker of the council following resignation of former speaker, Kedir Jawar who is now assigned as Deputy Mayor as well as Trade and Investment Office Head.

The council also made other changes to the city cabinet.

Dire Dawa is a chartered city whose ethnic quota based administration system, among other things, has been causing protest for the past several months.

Based on the ethnic quota arrangement, 40 percent to the city administration constitute ethnic Somali, 40 percent constitutes ethnic Oromo and 20 percent of constitutes other ethnic groups in Ethiopia. Apart from being a discriminatory system, the arrangement is not reflective of existing proportions of ethnic diversity in the city.