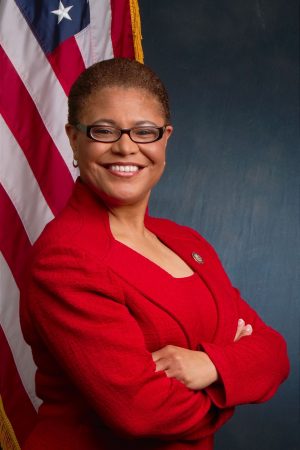 On Tuesday, March 5, Representative Karen Bass (D-Calif.), Chair of the House Foreign Affairs Subcommittee on Africa, and Representatives Joe Neguse (D-Colo.) and Ilhan Omar (D-Minn.) returned from a Congressional Delegation (CODEL) to Ethiopia and Eritrea. The goal of the visit was to support regional peace and security in the Horn of Africa and to encourage countries to place human rights at the center of the reforms.

“It was important our first Congressional Delegation trip of this Congress be to the Horn of Africa because of the change the region is going through following the historic peace agreement between Ethiopia and Eritrea that ended 20 years of conflict,” said Representative Bass. “Prime Minister Abiy Ahmed came into office with a serious reform agenda aimed at ending political repression. Since coming into office, the Prime Minister has freed thousands of political prisoners, opened the media, and appointed women to half of the cabinet posts. I was in Ethiopia shortly after the Prime Minister took office and looked forward to an update on his progress. Our delegation was fortunate to meet with the President of Ethiopia and several of the new female cabinet members.

“In addition to wanting to send the signal that we support Prime Minister Abiy Ahmed’s reform agenda, our delegation was also meant to encourage the new peace between Ethiopia and Eritrea. The last U.S. Congressional Delegation to visit the country was in 2005, when my predecessor on the Subcommittee, the late Congressman Donald Payne of New Jersey, traveled to Eritrea. Our delegation had a number of productive conversations with Eritrean government officials. We discussed the need for transformation and urged officials to be vigilant about human rights abuses in Eritrea and to implement respect for civil liberties. We also discussed Eritrea’s unlimited national service requirement, which is one of the main reasons why thousands have fled the country. The government officials we met with informed us that the policy is under review now that the security situation in Eritrea has improved. We also met with young Eritreans and were able to hear about their daily lives and their hope for the future.

“This Congressional Delegation to the Horn of Africa was critical because it signals to the region as a whole that we are supportive of positive reforms.”

“I echo Chairwoman Bass’ statement, and appreciated the opportunity to join her on this diplomatic CODEL trip to Ethiopia and Eritrea,” said Representative Neguse. “I look forward to further discussions with my colleagues and the State Department on how to further promote peace, security, human rights, and democratic reforms in the region.”

“I was impressed with the regional thaw in East Africa after Eritrea and Ethiopia made peace,” said Representative Omar. “As a member of the House Foreign Affairs Subcommittee on Africa, my focus has been on peace and human rights and shifting our focus on humanitarian aid to developmental aid. It was a great honor to join Chairwoman Bass for the first official CODEL to the Horn of Africa. The United States has been supportive of Prime Minister Abiy’s reform agenda, and I believe we must use this opportunity to foster prosperity in the region and make investments that will fundamentally transform our relationship with the region.”