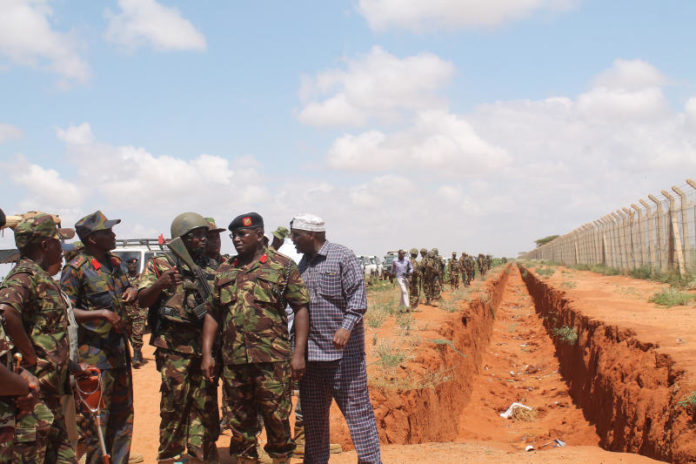 The once vibrant Kenya-Somalia border point in Mandera town that has remained closed for several years could soon be reopened. This follows improved security brought about by the ongoing construction of a border wall that has covered nearly 20km since the work started in 2015.
A security team led by parliamentary Committee on Defence and Foreign Affairs chair Katoo ole Metito and Defence Principal Secretary Torome Saitoti recently inspected the completed stretch of the fence.
A security team led by parliamentary Committee on Defence and Foreign Affairs chair Katoo ole Metito and Defence Principal Secretary Torome Saitoti recently inspected the completed stretch of the fence.
They were accompanied by senior army officials, including the Vice-Chief of Kenya Defence Forces (KDF) Lieutenant General Robert Kibochi. The tour was marked by rare heavy security that brought Mandera town to a near standstill as the convoy, which included a tank and armoured vehicles, moved from the airstrip to the county headquarters before crawling through the town to River Dawa. Briefing the team on the prevailing security situation, Mandera Deputy Governor Mohamed Arai said no Al Shabaab attack had occurred in the town for the past three years, an improvement he attributed to the security barrier that is expected to stretch more than 50km. “Mandera town used to suffer regular attacks and our governor was a prime target. But all that is now in the past,” said Mr Arai who represented Governor Ali Roba during the inspection tour.
Arai noted that the opening of the border point would regularise trade between the two countries, which was currently dominated by sub-standard goods trafficked in by smugglers. “Goods of questionable standards being smuggled into Kenya from the port of Kismayu include sugar, rice, spaghetti, cooking oil and petroleum products,” said Arai. He said the county was losing an average of Sh2 billion each month, and the country much more money, due to the closure of the border.
Mr Metito said his committee would push for the reopening of the border as soon as possible, but cautioned residents against complacency over their security. “Your security starts with you and the fence can only be effective if the people co-operate on security issues such as reporting suspicious characters to the authorities,” he stated. He called on the two countries to speedily resolve the diplomatic fallout that temporarily halted construction at Bulahawa where Somali settlements spill into Kenya. “We want that diplomatic impasse sorted out so that the gap left can be sealed to further bolster security.” Maj E.M Kasura for the army said a fibre optic cable would run along the fence and surveillance cameras installed to enhance security and prevent vandalism. Residents called for the resumption of quarry activities, which are a main source of employment in the county, now that security had improved. A former councillor, Suleiman Mohamud Isaak, called for the withdrawal of KDF soldiers from the interior of Somalia where Al Shabaab had been routed and back to be borders of Mandera, Wajir, Garissa and Lamu counties to guard against infiltration in places yet to be reached by the security fence.
The security team also toured the deserted Kenya Revenue Authority, Immigration and Kenya Bureau of Standards offices and expressed dismay at their neglect. Nearly all offices and residential houses spotted bullet holes on their walls, bespeaking a troubled past