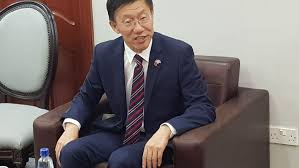 MOGADISHU, Oct. 1 (Xinhua) — The Chinese embassy in Somalia on Monday held a ceremony to celebrate China’s National Day which falls on Oct. 1, as well as the 69th anniversary of the founding of the People’s Republic of China in the Somali capital of Mogadishu.

Dignitaries who included cabinet ministers in the federal government of Somalia, lawmakers and foreign diplomats attended the event.

Chinese ambassador to Somalia Qin Jian said that China, after decades of development, stands as the world’s second largest economy and contributes more than 30 percent to the world economic growth.

He added that by the current UN standard, more than 700 million Chinese people have been successfully lifted out of poverty.

The official added that China appreciates the positive progress Somalia has made in its peace and reconstruction process while safeguarding sovereignty and territorial integrity.

“China is willing to work with Somalia to strengthen cooperation under the framework of the Belt and Road Initiative, the Forum on China-Africa Cooperation and the China-Arab States Cooperation Forum to achieve and write a new chapter in the relationship between the two countries,” said Qin.

Abdukadir Ahmed-Kheyr Abdi, the state minister in the Somali ministry of foreign affairs, hailed China’s phenomenal transformation as it marked its 69th anniversary of founding.

“Somalia and China share long-standing friendship based on shared interests and aspirations.” he added.