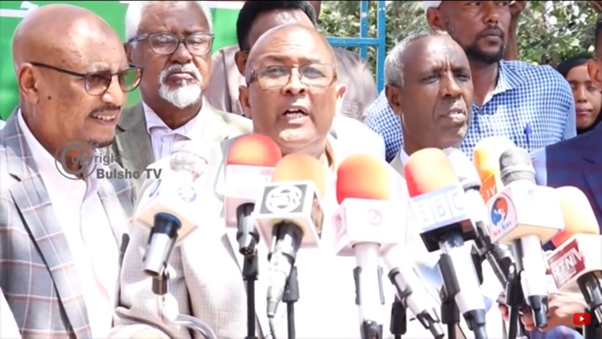 News Analysis — Hargeisa— The leaders of the two opposition parties of Somaliland, Waddani and UCID, held a joint press conference in Hargeysa and urged the incumbent administration to call  early presidential elections in 2020. Waddani Party Chairman, Abdirahman Mohamed Abdullahi, who spoke to the media, described the leadership style President Muse Bihi Abdi as “dictatorial”. Abdullahi listed a catalogue of violations he attributes to President Bihi — violation of the constitution, damaging the neutrality and independence of key institutions, destruction of the nascent democracy of Somaliland. “President Muse Bihi Abdi aims to destroy legal political parties by calling for early qualifying date for political parties” Abdirahman said.

In a speech to Somaliland Parliament  President Muse Bihi Abdi said  that existing political parties and political associations would have to contest for qualifying party status in the near future.  In 2012 one new party, Waddani, qualified for a party status along with Kulmiye, the ruling party, and UCID. “2022 is the year for parties and political associations to renew or qualify for a political party status. President Bihi will need a parliamentary legislation to bring forward the 2022 date” says Salah Ali, a Hargeysa-based businessman. Chairman Abdullahi accused President Abdi of fully taking control of the Parliament and House of Elders (Guurti). In 2017 President Bihi’s Kulmiye Party won 55% of votes, making it the first party in Somaliland to win a five-year second term.

Opposition parties were in campaigning mood. There is no way they can force President Muse Bihi, in his third year of office term, to call early general elections. Somaliland does not have a coalition government. Waddani Chairman criticised President Abdi for rejecting suggestions of mediation committee appointed to play a role in solving the dispute over the make-up electoral commission. “President Bihi rejected proposals of the mediation committee accepted by the three parties” Waddani Chairman said. President Bihi, the Chairman of the ruling party, argued that he could not accept recommendations of the mediation committee for legal reasons.

President Abdi may have his way to bring forward the date for contesting for a new or renewed party status. “Early elections have no precedent in Somaliland” says Khadar Mariano.

Local and parliamentary elections in Somaliland were slated to take place in 2019. Disagreements over the electoral commission remain a stumbling-block to holding local and parliamentary elections. The House of Elders has had its tenure extended by three years.  2005 was the year the last local elections were held in Somaliland. The tenure of Somaliland Parliament ended in 2019 after two year extension by the House of Elders.