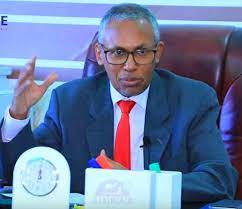 Minister of Finance Dr Saad Ali Shire has announced that the increase in military salaries will begin in January, the President has signed the implementation of budget, and the minister issued ministerial decree.

The Ministry of Finance has unveiled to the public a version of this year’s budget, which includes the amendments by the House of Representatives made to it.

“We have published on our websites the 2022 government budget, if you are interested you can download it from our social sites”, was a message posted on social media by the Ministry of Finance.